The alignment tools 'Bowtie' and 'Lastz' from the tool group NGS: Mapping have moved from the Galaxy distribution to the Galaxy Main Tool Shed.

Migration scripts for both Bowtie and Lastz will run upon Galaxy's first launch (after updating to this release) that will automatically handle installing replacement tool wrappers from the Tool Shed. Primary executables for Bowtie and Lastz plus target reference genomes should still be installed as described in the Galaxy wiki - start in the Tool Dependencies section.

Bowtie is an ultrafast, memory-efficient short read aligner. It aligns short DNA sequences (reads) to the human genome at a rate of over 25 million 35-bp reads per hour. Bowtie indexes the genome with a Burrows-Wheeler index to keep its memory footprint small: typically about 2.2 GB for the human genome (2.9 GB for paired-end).

LASTZ is a program for aligning DNA sequences, a pairwise aligner. Originally designed to handle sequences the size of human chromosomes and from different species, it is also useful for sequences produced by NGS sequencing technologies such as Roche 454.

CloudMan offers an easy way to get a personal and completely functional instance of Galaxy in the cloud in just a few minutes, without any manual configuration.

This update brings a large number of updates and new features, the most prominent ones being:

This update comes as a result of 175 code changesets; for a complete list of changes, see the commit messages.

Any new cluster will automatically start using this version of CloudMan. Existing clusters will be given an option to do an automatic update once the main interface page is refreshed.

The various types of contents of a tool shed repository ( valid tools, invalid tools, datatypes, workflows ) as well as the dependencies that are defined for the repository are now displayed in clickable containers that can be opened or closed. For example here is the view of the emboss_5 repository that I'm hosting on my local Galaxy tool shed.

Opening each of the above containers (by clicking on the links) displays the contents of each. 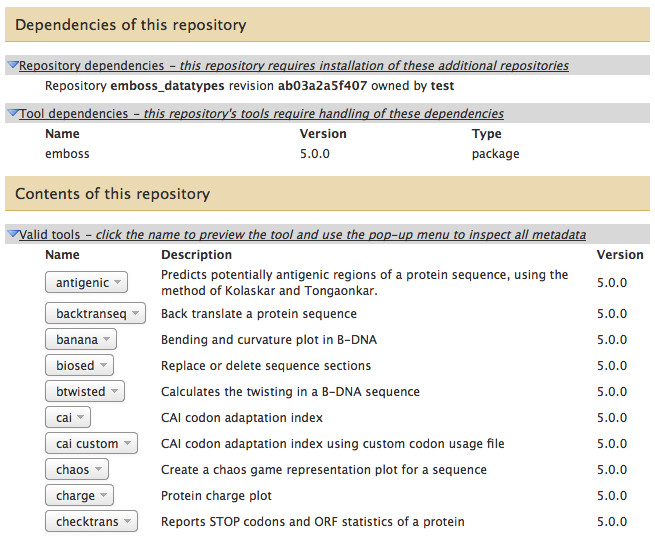 In addition to its rich set of features, the Galaxy tool shed provides a suite of functional test scripts that ensure the features behave as expected. This test framework is very similar to the functional test framework provided for Galaxy itself, and consists of files mostly contained within the `~/test/tool_shed` directory hierarchy in the Galaxy root directory. [Read more…](http://wiki.galaxyproject.org/HostingALocalToolShed#Functional_test_framework_for_the_tool_shed).

``` # Where the hgweb.config file is stored. The default is the Galaxy installation directory. #hgweb_config_dir =
``` ```
4. #4 Move the important details to the beginning of the "New tool shed repository alert email template" and include the repository name in the email subject line; thanks to [Peter Cock](https://bitbucket.org/peterjc).

All Galaxy instance maintainers are strongly encouraged to run the latest release.

The Galaxy Team is a part of BX at Penn State, and the Biology and Mathematics and Computer Science departments at Emory University.

Galaxy is supported in part by NSF, NHGRI, the Huck Institutes of the Life Sciences, and The Institute for CyberScience at Penn State, and Emory University.