The Galaxy community is developing and maintaining a collection of tutorials that are designed to be interactive and are built around Galaxy: https://training.galaxyproject.org. These tutorials can be used for learning and teaching how to use Galaxy for general data analysis, and for learning/teaching specific domains such as assembly and differential gene expression analysis with RNA-Seq data. These materials are targetting both self-paced individual learners and instructors.

To help highlight our tutorials and the training effort of the community, every month a member of the community will select one tutorial and explain in the Galactic Blog why they selected this tutorial.

This month, the Galaxy contributor of the Month!, Simon Gladman, selects and presents the tutorial: "Genome annotation with Prokka", from the topic "Genome Annotation": 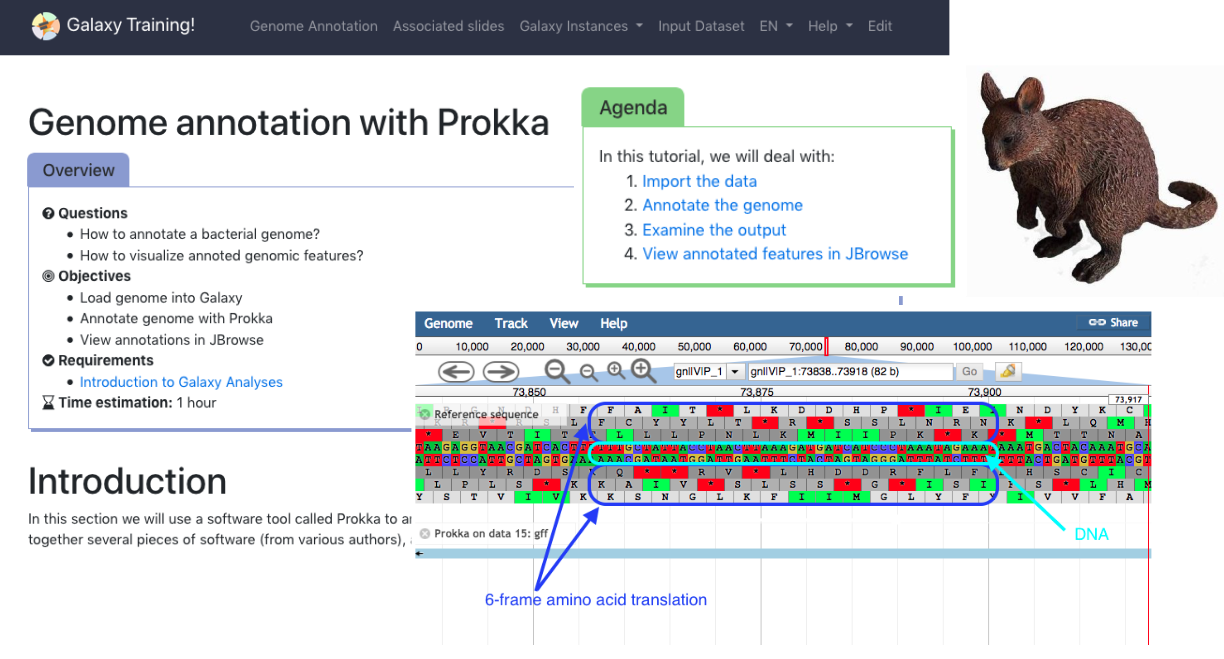 The full version is available on the training website: http://training.galaxyproject.org/topics/genome-annotation/tutorials/annotation-with-prokka/tutorial.html

Simon, we are looking forward to learn more about your choice!

We learned about you and Galaxy in the Contributor of the Month post. Can you do a small recap here?

I originally trained as an engineer and worked in dairy research for about 15 years before moving into bioinformatics in the mid 2000s. I spent a lot of time assembling and annotating cheese starter culture organisms and some pathogenic bacteria in those days. We only had Velvet which was hard to use and so I wrote the Velvet Optimiser in 2008 - 2009 or so. My colleague Torsten Seemann was really into bacterial annotation and so wrote Prokka. Since then VelvetOptimiser and Prokka have been used a lot in the bacterial world.

Can you tell us a little about yourself and your relationship to training?

I was introduced to Galaxy and starting using it in earnest when I moved jobs to Monash/Melbourne Universities here in Australia. We were developing a universal genomics cloud image (Genomics Virtual Lab) and Galaxy was the centrepiece of that. I found Galaxy to be amazing and loved the idea of being able to easily teach an analysis technique to people who have never used the command line! I started developing training material for Assembly and Annotation using Galaxy and it was fairly popular in both our Masters of Bioinformatics course and locally/nationally run workshops.

I'm still one of the teachers of the Bioinformatics Masters course here at Melbourne University and also for a series of nationally distributed bioinformatics workshops. Mostly using Galaxy! I've been involved with the Galaxy Training Network since it started and really enjoy being part of the community. It's full of amazing and friendly people and we all want to work together to produce more and better training material and infrastructure.

Why have you selected this particular tutorial as the tutorial of the month?

I selected the Prokka tutorial as the tutorial of the month as it's one of the first that I ever taught as well as being one of the areas I'm interested in. My colleague wrote the software and it is heavily used in the Bacterial/Micro-organism space.

Thanks to Simon for selecting this tutorial and answering our questions. We would like also to thank Simon, Anna Syme and Torsten Seemann who developed and contributed to this tutorial.

We recommend going through this nice tutorial, using it for self-learning or during workshops. Enjoy it!