Did you ever feel the need for speed, as in more compute capacity on your Galaxy instance? There are just some days when the local capacity does not cut it and offloading some compute jobs would be nice. In this post, we'll take a look at how to use a new package, called GalaxyCloudRunner, that streamlines the process of setting up additional compute machines for your Galaxy instance and allows user jobs to be sent to those remote machines. This allows you to, for example, use your laptop for text manipulation steps, but then offload the more compute intensive jobs to a remote machine. Another example may be to add additional resources to a cluster during a workshop training session.

The GalaxyCloudRunner provides a set of configurable dynamic job rules for Galaxy that can be used to route user jobs. GalaxyCloudRunner leverages Pulsar, Galaxy's remote job runner, and CloudLaunch - an application for creating remote machines and configuring applications on them. Together, GalaxyCloudRunner, Pulsar, and CloudLaunch allow virtual machines to be dynamically created on any of the four most popular cloud providers: Amazon Web Services (AWS), Google Cloud Platform (GCP), Microsoft Azure, and OpenStack. The VMs are automatically configured to start accepting jobs from your Galaxy instance, and user jobs are routed to them following desired rules.

To make use of the GalaxyCloudRunner in a Galaxy instance you need to be a system administrator of the given Galaxy server and perform the following steps:

In this step, we need to edit Galaxy's job_conf.xml and make it use the GalaxyCloudRunner rules. There are a number of rules available so you can probably experiment with some options over time to determine what makes most sense for your needs, but in principle, this step needs to be performed only once. The default rule, which we'll use here, routes all jobs to GalaxyCloudRunner workers. If a job fails or no workers are available, the job will be automatically resubmitted to a desired location. In the example below, this is just the local job runner but any other destination can be supplied. To see the other available rules, check out the documentation page: http://gcr.cloudve.org/en/latest/topics/configure_galaxy.html. Also, note that the instructions we're following here apply to Galaxy versions 19.01 or later. See the documentation if you're running an older version of Galaxy.

To enable this rule, edit config/job_conf.xml and add the content between the comments:

One extra step here is to update the CloudLaunch API key in the above configuration. Do so by visiting the "My Profile" page on CloudLaunch: https://launch.usegalaxy.org/profile and obtaining an API token: 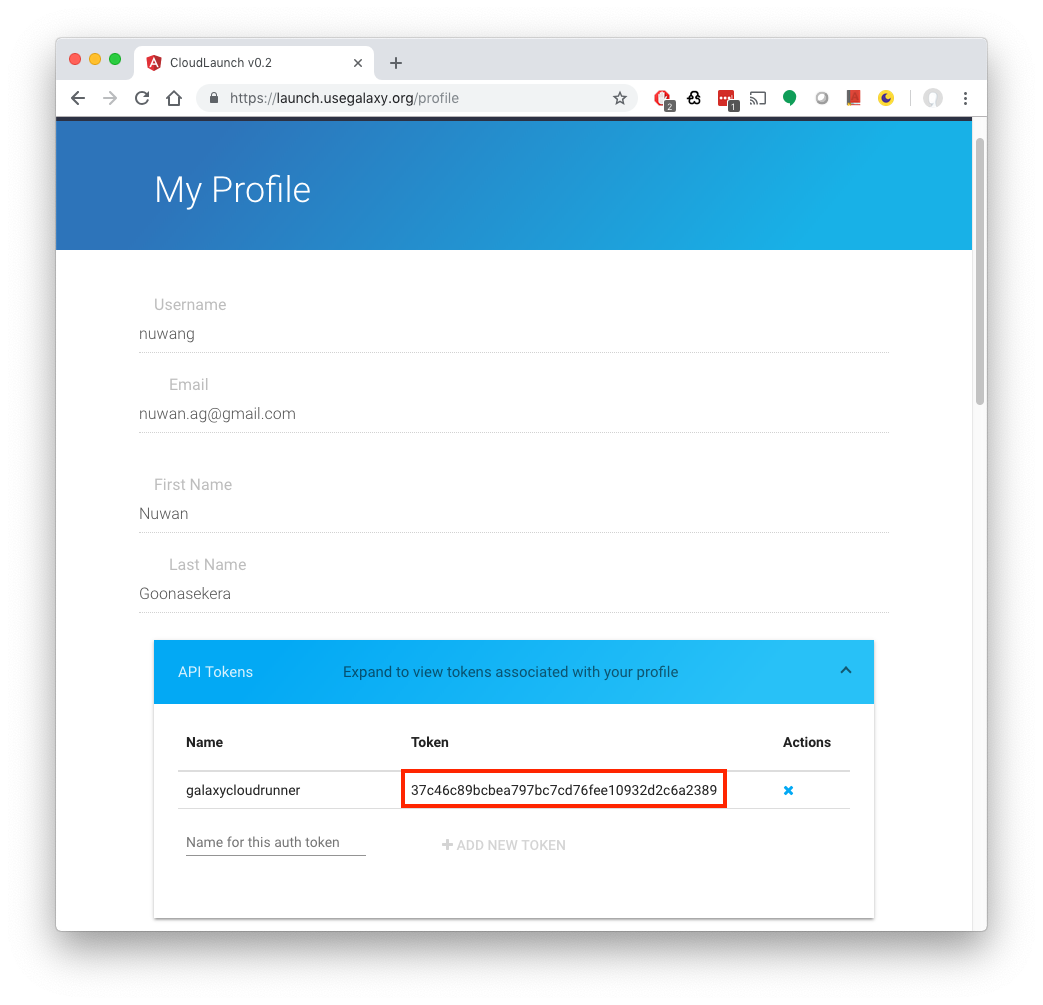 Now, whenever you’d like to add more capacity to your Galaxy instance, head over to the Cloud Bursting appliance on CloudLaunch: https://launch.usegalaxy.org/catalog/appliance/pulsar-standalone and launch as many machines as you'd like. After the machine(s) come up, usually 3-5 minutes, Galaxy will automatically discover them by querying CloudLaunch and route jobs to them based on the supplied rules. When you no longer need the extra capacity, just delete the machines from CloudLaunch.

In the following screenshots, we're using the Google Cloud Platform to add a machine. Note that you can also mix which providers you use for your workers.

From the user standpoint, the experience of using Galaxy is no different: jobs are submitted as normal and, based on the rules and available resource capacity, Galaxy submits the jobs to the available resources. In the background, Pulsar will handle tool installation and data staging for inputs and outputs so all data ultimately ends up at your Galaxy instance. In the following screenshot, a job submitted on a local laptop was sent to a remote GalaxyCloudRunner instance running on GCP where Pulsar automatically installs the necessary tools via Conda and runs the job via an embedded Slurm job manager.

While, for a large number of tools, the above setup will work nicely, there are situations and requirements that may not work. We've summarized the known limitations in the GalaxyCloudRunner documentation: http://gcr.cloudve.org/en/latest/topics/additional_notes.html

One topic that is not explicitly discussed there is the use of a small Galaxy instance running on a laptop and bursting to cloud machines. This is a great use case but keep in mind that in order for everything to work, the local instance will need to have the necessary tools and reference data installed.

Finally, this is the first released version of GalaxyCloudRunner so please feel free to give it a try, reach out, and let us know what works and what doesn't. As CloudMan 2.0 is developed, we will be adding automatic scaling to the launched instances and better resource monitoring. As Pulsar is developed, data staging and transfers will improve. Also, don't hesitate to jump in and start hacking away to make it better: https://github.com/CloudVE/galaxycloudrunner!