Less than a month ago we shared the news about the beta3 release of GVL 5, which introduced isolated projects within a GVL and additional applications alongside Galaxy. In this beta4 release, we would like to announce availability of a data browser, project-level isolation, and availability of the latest release of Galaxy.

Starting with the beta3 release of the GVL, there was a notion of shared storage between different applications and across GVL projects that enables users to easily access the same data between those applications. Namely, each GVL project comes with a project-scoped data folder that is available in the available applications, mounted under /gvl/projects/current/. For example, a file formatted in the Terminal is immediately visible in RStudio under the same path and can be readily visualized and ingested for analyses. Additionally, each GVL comes with a folder that is shared across all projects, available at /gvl/public. Any file placed in this directory will be simultaneously available in any project on the given GVL instance.

For the beta4 release we have added a visual data browser that allows users to upload and navigate around their GVL data from anywhere. Based on NextCloud, a user can access their GVL data using a web browser, a desktop app, or a mobile app. Data can be organized into folders using drag-and-drop, text files can be previewed, and even mounted as an external drive on the user’s local laptop to interact with it as if it was a local folder. Think of the GVL as your data repository in the cloud. 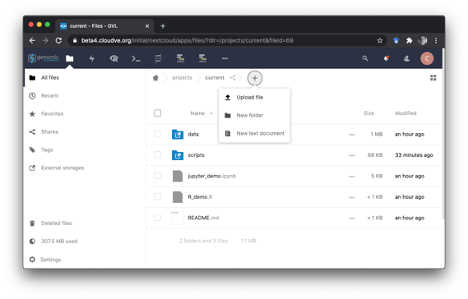 The data browser also provides the ability to connect buckets from AWS S3 or OpenStack and make them available within the GVL. Once a user attaches a bucket as external storage, data can be copied from the bucket into one of the folders available to the GVL applications. Similarly, any data generated on the GVL can be copied or moved to a bucket for persistence and further sharing. The screenshot below captures the contents of an S3 bucket viewed through the AWS web console and the content of that same bucket linked to a GVL instance.

Finally, the project folders available on the GVL are automatically backed up to the respective cloud provider’s object storage service. In the case of AWS, an S3 bucket is created for a GVL and any data uploaded or generated on the GVL is synchronized to that bucket using the same folder structure as what is created on the GVL. Just like the GVL, these backups work for AWS, OpenStack, and GCP clouds. The backups provide a new level of redundancy for the GVLs that minimize chances for data loss or corruption as well as enable service recovery in case the GVL servers are unexpectedly lost.

With the introduction of GVL projects in the previous release the vision for a hosted GVL that caters to different needs of users while minimizing infrastructure management overhead came one big step closer to reality. However, the initial implementation provided no isolation between projects for users - any user could access any project. For single-user Galaxy instances or private group instances this was not sufficient. While more work remains to ensure proper service isolation, an initial implementation is now available that restricts user access to projects. Managed through Keycloak roles, when a new project is created, a new GVL user is also created that is the sole user authorized to access the newly created projects. Additional users can be added by an admin via the Keycloak web console. When a user logs in, they now see only the projects that are available to them and can switch between them from the CloudMan console. However, it is also possible to easily collaborate between multiple projects that users have access to. Projects can share data between each other using the public shared folder, or by mounting the project’s data into another project, provided the user has permissions.

A new version of Galaxy was recently announced, release 20.05. This release brings an accelerated Galaxy startup and a complete rewrite of the workflow editor and run form that are noticeably snappier among many other user upgrades and developer improvements. The GVL beta4 has incorporated this release of Galaxy and any new GVL will automatically use Galaxy 20.05.

This new GVL release allows you to