From dev to testing to production on the same stack.

We are happy to announce general availability of a new major version of the Galaxy Helm chart: version 4.0. The Galaxy Helm chart automates the mechanics of deploying Galaxy into a single package. The same package can be used to deploy Galaxy for development, testing, or production. With v4, the chart also introduces improvements for managing Galaxy over time. Let’s take a look at the highlights!

We have changed how Galaxy obtains tool wrappers to make the startup time for Galaxy about ~30% faster and more consistent. Traditionally, production deployments would mount Galaxy’s CVMFS repository and load tool wrappers from that file system. Tool wrappers are generally small files but there are many of them, making this a very slow process via CVMFS as each file must be cached locally before Galaxy would start. This also required CVMFS to be locally available, which is not possible on Mac computers due to an issue with CVMFS drivers.

Version 4 of the Galaxy chart retrieves tool wrappers from object store buckets instead of the CVMFS. As the Galaxy Helm chart is installed, a relevant archive is downloaded before the Galaxy process starts, hence eliminating the wait while Galaxy is starting up. This process works in three stages: (1) an initial archive contains the necessary XML files so Galaxy can load the tool panel. This archive is about 1MB in size and it is downloaded before Galaxy starts; (2) a second archive contains the tool scripts and any tool configuration files that are required to run the tools. This archive is about 110MB and it is downloaded as part of the startup but Galaxy does not need to wait for it; (3) finally, the third archive contains the tool test data. It is about 770MB in size and can be downloaded in due time. The URLs of the three archives are controlled via chart variables so custom toolsets are readily supported.

A result is the faster and more consistent startup time (see timing results below), reduced dependency on the Galaxy-project-managed CVMFS structure, increased opportunities for toolset customization by individual sites, and ability to load and run the tools without the CVMFS. In the future, it will be interesting to explore options for retrieving reference data using a similar approach and entirely eliminate the dependency on CVMFS. 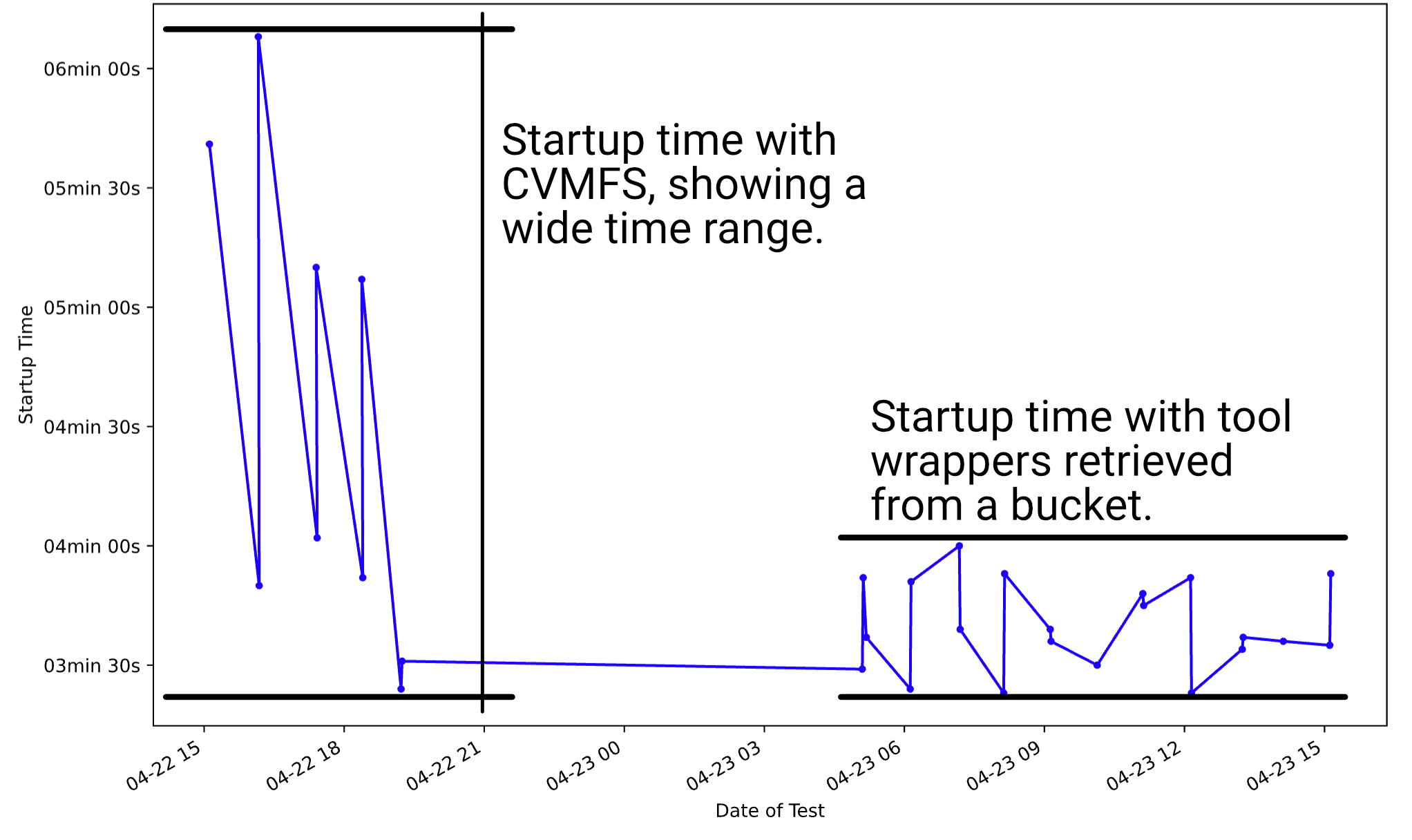 Installing Galaxy is only the first step towards offering an analysis environment for users. A medium to large-scale installation of Galaxy can easily consume half of a system administrator’s time. The Galaxy Helm chart is aiming to lower this burden by consolidating best-practice deployment strategies into a single package as well as offering capabilities for streamlining long-term application management.

With the v4 release, the chart now uses a Postgres Operator for database management. Kubernetes Operators capture highly capable logic and processes for entire application lifecycle management that mimic that of a human administrator. This includes daily application operations, healing, upgrades, logging, and more (yes, it would be great to have a Galaxy Operator one day). With this upgrade to the Galaxy chart, management of the database layer supports multiple PostgreSQL versions (currently ranging between v9.5 and v13), high-availability mode, custom UI, and an eye toward the future.

Increased robustness of the deployment

Automated and ongoing testing are critical capabilities for ensuring robustness of code. With v4 of the Galaxy Helm chart, continuous integration capabilities have been added. The chart repository now implements a number of GitHub Actions that (1) lint each commit, (2) perform two end-to-end Galaxy deployment, with and without the CVMFS, and (3) package the chart for distribution based on the label used on a pull request.

Collectively, this increases the quality of the chart implementation because each pull request must adhere to consistent standards. With ongoing deployment tests, any regressions will be more readily pinned, and automated packaging ensures all compatible components make up the released package.

In addition to the chart testing, the latest chart release is used to automatically and on an ongoing basis test all the tools available in the default release. Split over the course of a week, each day, 1/7th of the toolset is tested and test results recorded. This provides a new test target for all containerized Galaxy tools as well as a longitudinal view into test results.

Support for Helm 2 has been dropped. Helm 2 stopped being maintained in November 2020 so it’s time. And Helm 3 is much better.

Many Galaxy configurations have gradually transitioned from XML-based files to YAML-based files. Job configuration file is no exception and the chart v4 has adopted the YAML-based configuration. A direct benefit for the chart is the ability to set individual values within the file using the --set option with Helm as opposed to having to update the entire file even if only a single value is being changed.

The Galaxy Helm chart has long held an option to specify resource requirements for a tool as well as declare or override which container image is used for a given tool. Version 4 of the chart introduces an updated format for specifying these values. The new format is based on experience of using the old format and provides a more expressive format that allows individual values to be set. The chart remains backwards compatible but we recommend updating the values to use the new format to gain the above-mentioned benefits.

This chart update brings along new default versions of the software it wraps. The chart now requires Kubernetes 1.16 or newer due to the introduction of startup probes. Galaxy has also been upgraded to the latest available version, 21.05. Finally, with the Postgres Operator, new deployments come with PostgreSQL 13.

In addition to the core software updates, v4 of the chart introduces a new and updated toolset for Galaxy. The toolset has been streamlined to include relevant tools for a number of domains and it includes only the latest versions of the included tools. The toolset includes just over 200 tools, with a detailed list available in the CI repo. On a daily basis, this toolset is automatically copied off the CVMFS, compressed, and pushed to a publicly available bucket. This toolset can thus be used either through the traditional CVMFS setup or the new bucket method.