Welcome to the September 2016 Galactic News, a summary of what is going on in the Galaxy community.

Galaxy Admin Training 2016 is a weeklong event offering basic and advanced sessions. It is being held in Salt Lake City, Utah, November 7-11, 2016, the week before Supercomputing 16 (SC16) meets in Salt Lake.

This two day basics session will introduce participants to what you need to know to get a Galaxy server up and running on a standalone server. You'll also learn how to extend your Galaxy with your own tools and tools from the community, and how to define reference data in your server as well.

The three day advanced session will build on topics covered in the basics section. This session both extends those topics, such as tool definition, and adds new ones, such as working with compute clusters and heterogeneous resources. The goal of the advanced workshop is to enable Galaxy administrators to create robust, high-performance Galaxy instances that take full advantage of available tools and compute and storage resources.

Register by September 19 and save up to $130 off standard registration rates (and up to $250 if you work in industry).

We hope to see you in Salt Lake!

The 2016 editions of Swiss-German Galaxy Days will be held 20-21 October in Freiburg (Germany).

Registration is free, but space is limited on both days. We recommend you register soon to secure your spot for one or both days of the SG2016Tour: Register Now

There are a plentitude of Galaxy related events coming up. Here's what's coming up over the next few months:

GCC2016 Talks, Posters and Training Slides are on the F1000Research Galaxy Channel

Slides for keynote, accepted and lightning talks, and training sessions at GCC2016 are now available on the F1000Research Galaxy Channel. Slides and posters have all bee assigned DOIs.

If you present at Galaxy at an event, please consider submitting your presentation to the Galaxy channel.

There are over 80 publicly accessible Galaxy servers and four semi-public Galaxy services. Here's what happened with them in August. 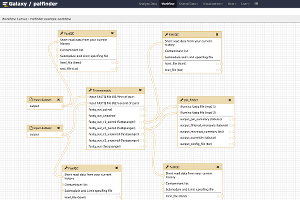 
No new entries were added in August, but a new virtual appliance was added to the VA directory:

Planemo is a set of command-line utilities to assist in building tools for the Galaxy project. Planemo saw several releases in August. See GitHub for details.

Pulsar updates were released in August. Pulsar is a Python server application that allows a Galaxy server to run jobs on remote systems (including Windows) without requiring a shared mounted file systems. Unlike traditional Galaxy job runners - input files, scripts, and config files may be transferred to the remote system, the job is executed, and the results are transferred back to the Galaxy server - eliminating the need for a shared file system.

The August releases align the library with recent changes to Galaxy.

The alpha release of the blend4php package, a PHP wrapper for the Galaxy API was announced in June. It follows the lead of BioBlend which provides a Python package for interacting with Galaxy and CloudMan--hence the use of 'blend' in the name of this package. blend4php currently offers a partial implementation of the Galaxy API and includes support for datasets, data types, folder contents, folders, genomes, group roles, groups, group users, histories, history contents, jobs, libraries, library contents, requests, roles, search, tools, toolshed repositories, users, visualizations and workflows.

An update to Galaxy CloudMan on AWS was released in May. CloudMan offers an easy way to get a personal and completely functional instance of Galaxy in the cloud in just a few minutes, without any manual configuration or imposed quotas. Once running, you have complete control over Galaxy, including the ability to install new tools.