Welcome to the March 2017 Galactic News, a summary of what is going on in the Galaxy community. After 5 years of monthly newsletters, we took a newsletter hiatus last month, but now we are back, and ready to report on our continuing mission to explore the Galaxy.

Thanks for sticking with us.

As always there are a wealth of events coming up. Here are some highlights:

We are pleased to announce that early registration and abstract submission for the 2017 Galaxy Community Conference (GCC2017) are now open.

GCC2017 will be in Montpellier, France, 26-30 June and will feature two days of presentations, discussions, poster sessions, lightning talks, computer demos, keynotes, and birds-of-a-feather meetups, all about data-intensive biology and the tools and infrastructure that support it. GCC2017 also includes data and coding hacks, and two days of training covering 16 different topics.

GCC2017 will be held at Le Corum Conference Centre in the heart of Montpellier, just 10km from the Mediterranean. This event will gather several hundred researchers addressing diverse questions and facing common challenges in data intensive life science research. GCC participants work across the tree of life, come from around the world, and work at universities, research organizations, industry, medical schools and research hospitals.

Early registration is also open and starts at less than 55€ / day for post-docs and students. You can also book low cost conference housing when you register.

GCC2017 is a great opportunity to discuss your research with others that are working in and facing similar challenges in data-intenisve life science research. But only if you can get there.

The Galaxy Community Fund is offering fellowships to early career researchers that would be coming from afar to attend GCC2017.

Fellowship applications will be selected based on multiple criteria including

See the application for full details on what's covered and what we ask you to provide.

We'll review applications in two rounds, one starting on March 20, and the other on April 5, 2017. Interested? Submit an abstract and apply for a fellowship. If you have visa concerns, you are encouraged to submit and apply by March 20.

The Plateform de BioInformatique - INRA Jouy en Josas is offering several Galaxy workshops in its "Bioinformatics by practice" training cyle this month. The sessions are composed of a theoretical part and practical exercises. They are given on the campus of the INRA center in Jouy-en-Josas. Workshops are in French and are open to anyone.

Metaproteomics of microbiomes at ABRF 2017

Learn how Galaxy can be used for proteomic data analysis, and also applications that cross the ‘omic domains.

"With a focus on metaproteomics for characterizing microbiomes, we will help participants learn how to utilize tools for mass spectrometry-based proteomics in Galaxy. Metaproteomics is a multi-omic approach, which characterizes proteins expressed by microorganism communities (microbiomes). Participants will also learn how to leverage metagenomics data to generate protein sequence databases used for proteomic analysis, and utilize the protein information to gain better functional understanding of microbiomes. In addition to receiving hands-on instruction on the use of the Galaxy platform and its implementation, participants will gain experience with the latest software tools and workflows for proteomic and metaproteomic data analysis developed via worldwide collaborative efforts."

See the full workshop description for more. There is still space avaialable.

"The Galaxy Australasia Meeting 2017 (GAMe 2017) was Galaxy Australia’s first major activity. Bringing together current and future Galaxy users and administrators from nine different countries, the meeting had a fantastic community feeling and resulted in many ideas for carrying plans forward in our region."

GAMe 2017 was held 3-9 February, at the EMBL-ABR Hub at the University of Melbourne.

See the full report for more.

A video of the February 16 GalaxyAdmins Meetup is now available. Nuwan Goonesekera and Enis Afgan presented an all-new version of CloudLaunch, an application for launching Galaxy on the Cloud instances. The new CloudLaunch allows multiple flavors of Galaxy to be deployed, Docker images or applications other than Galaxy. Each application can have its own custom user interface developed to accommodate the specific application needs.


See the Galaxy Events Google Calendar for details on other events of interest to the community.

Galaxy in Google Summer of Code 2017

The Open Genome Informatics Consortium was selected for the 2017 Google Summer of Code. Galaxy is one of several projects in the consortium and there are project ideas from all of them. Take a look. If you are interested, applications open March 20.

The transformation from our old MoinMoin based wiki to a GitHub based site refered to as the Hub will finish in early March.

We still need your help to finish the move.

We are using GitHub issues and a Gitter channel to coordinate work.

199 new publications referencing, using, extending, and implementing Galaxy were added to the Galaxy CiteULike Group in January and February. There are now over 4000 papers in the Galaxy CiteUlike library.

Some highlights from the past two months:

There are over 90 publicly accessible Galaxy servers and six semi-public Galaxy services. Here's what happened with them in January.

Besides having a really cool logo, the RNA-Rocket Galaxy server supports RNA-Seq analysis for literally thousands of microbial reference genomes. If you use, have used, or are going to start using RNA-Rocket, then the folks behind RNA-Rocket ask that you "please consider writing a brief statement of support to pathporthelp@vbi.vt.edu."

Efforts to increase GrAPPA’s functionality are underway. Features now being incorporated include:

Email Support is provided and suggestions and feedback from the user community are encouraged. You need to verify your email account before running jobs. GrAPPA is supported by the Langston Lab at the University of Tennessee 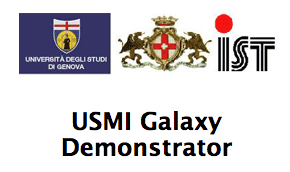 The server is still in a development phase, and a preprent is available:

The Cancer Computer Galaxy service significntly upgraded it's compute capicity last month. If you are a cancer researcher then check it out.

The Galaxy Committers is pleased to announce the 17.01 release of Galaxy.

For full details on all of the enhancements and fixes in this release, please see the full release notes.

And, thanks to Björn Grüning, there is also now a Docker image for Galaxy 17.01 as well.

A Pulsar update was released in February. Pulsar is a Python server application that allows a Galaxy server to run jobs on remote systems (including Windows) without requiring a shared mounted file systems. Unlike traditional Galaxy job runners - input files, scripts, and config files may be transferred to the remote system, the job is executed, and the results are transferred back to the Galaxy server - eliminating the need for a shared file system.

The January and February releases included several fixes related to Conda and tool linting, improvements to mulled testing (thanks to @mvdbeek), and brought in the latest changes to Galaxy.

Galaxy's sequence utilities are a set of Python modules for reading, analyzing, and converting sequence formats.

And please welcome Bérénice Batut of the University of Freiburg as the newest member of the IUC.