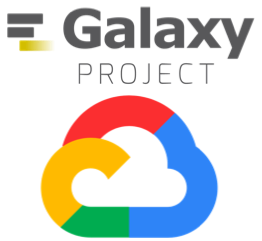 Building up support for the Google Cloud Platform in Galaxy

Get on the cloud, Google Cloud!

By Enis Afgan and Vahid Jalili

The Galaxy project has long embraced support and integration with cloud computing providers in its ecosystem. With the recent release of CloudBridge library v2, in collaboration with Google engineers, CloudBridge added support for the Google Cloud Platform (GCP), rounding off the integration with the four most popular IaaS cloud providers: AWS, Azure, GCP, and OpenStack. The CloudBridge library abstracts differences between multiple Infrastructure-as-a-Service (IaaS) cloud providers and supplies a consistent interface that applications can rely on. Galaxy has adopted CloudBridge as the primary means of interfacing with the multiple clouds.

In this post, we showcase a couple of early features that are now available on GCP from within the Galaxy ecosystem as enabled by the new release of the CloudBridge library. Namely, it is now possible to utilize GCP resources to store Galaxy’s user data in a Google Cloud Storage bucket, and to launch transient Galaxy instances on a Google Compute Engine (GCE) virtual machine.

The aforementioned features showcase the usability of the new implementation for GCP but the significance and potential of this upgrade will really become apparent in the coming months. Work is currently being done on CloudMan 2.0, which will enable automated deployment and management of production-grade Galaxy instances; best-practice deployment protocols will be captured in a reproducible process allowing Galaxy with all its dependencies and requirements (e.g., database, FTP, multiple processes, etc.) to be launched in a matter of a few minutes, on any compatible provider. This will include non-cloud providers as well. Once launched, CloudMan will offer web and API-driven management capabilities, including Galaxy configuration changes, persistence, infrastructure and process scaling, zero-downtime rolling restarts, a controlled upgrade path, and more. For the cloud providers, because of the abstraction that was implemented into CloudBridge, all of the planned features will be available without requiring downstream code changes or cloud-specific customizations.

Galaxy abstracts datasets from their corresponding persisted files via its data virtualization technology, named ObjectStore. It allows Galaxy to operate on datasets regardless of the access mechanism of their persistence media (e.g., a local disk, a network attached storage, or a cloud-based bucket), hence making Galaxy’s data management model (e.g., data access, and sharing) agnostic from the persistence media.

The ObjectStore delivers this promise by implementing a backend for each media, and exposing them via a common interface. It currently implements backends for local storage, network attached storage, and cloud-based storage. The cloud-based backend had a support for AWS S3 and Azure BLOB storage, and we added a built-in support for Google Cloud Storage (GCS) with the release of CloudBridge v2.0. Accordingly, we have enabled Galaxy to persist user’s analysis results on a single GCS bucket, or distributed across multiple buckets, which in addition to better scalability, improves data accessibility.

To set up Galaxy to persist data in your GCP bucket(s), first you would need to obtain your GCP credentials (we have thoroughly documented it here), and then use them to configure a GCP backend for ObjectStore (documented here). You can do so by adding the following block to the ObjectStore configuration file.

Having restarted Galaxy, ObjectStore will persist all the new datasets on the given GCS bucket. For instance, in the following figure we show uploading a new dataset to Galaxy. 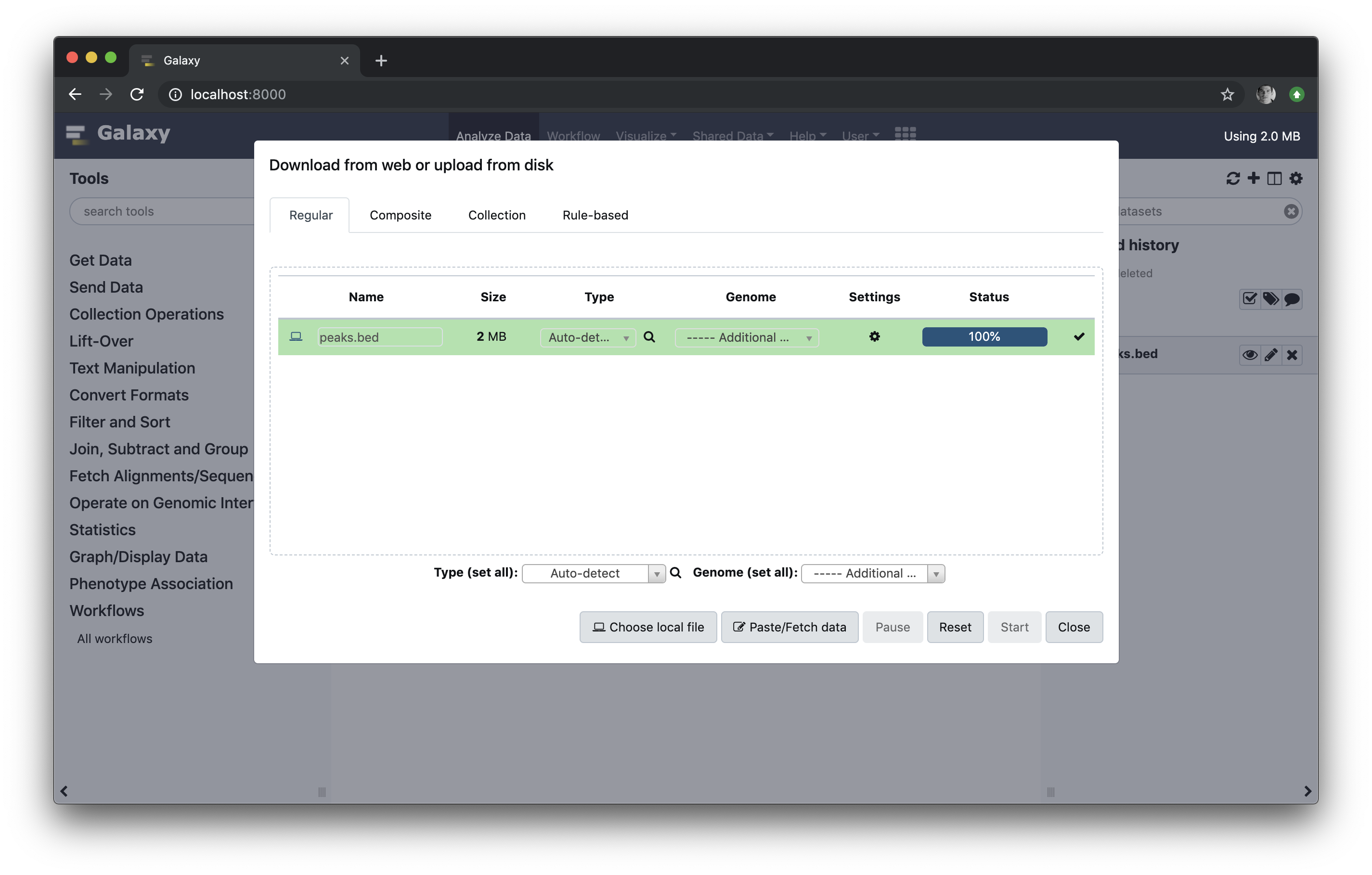 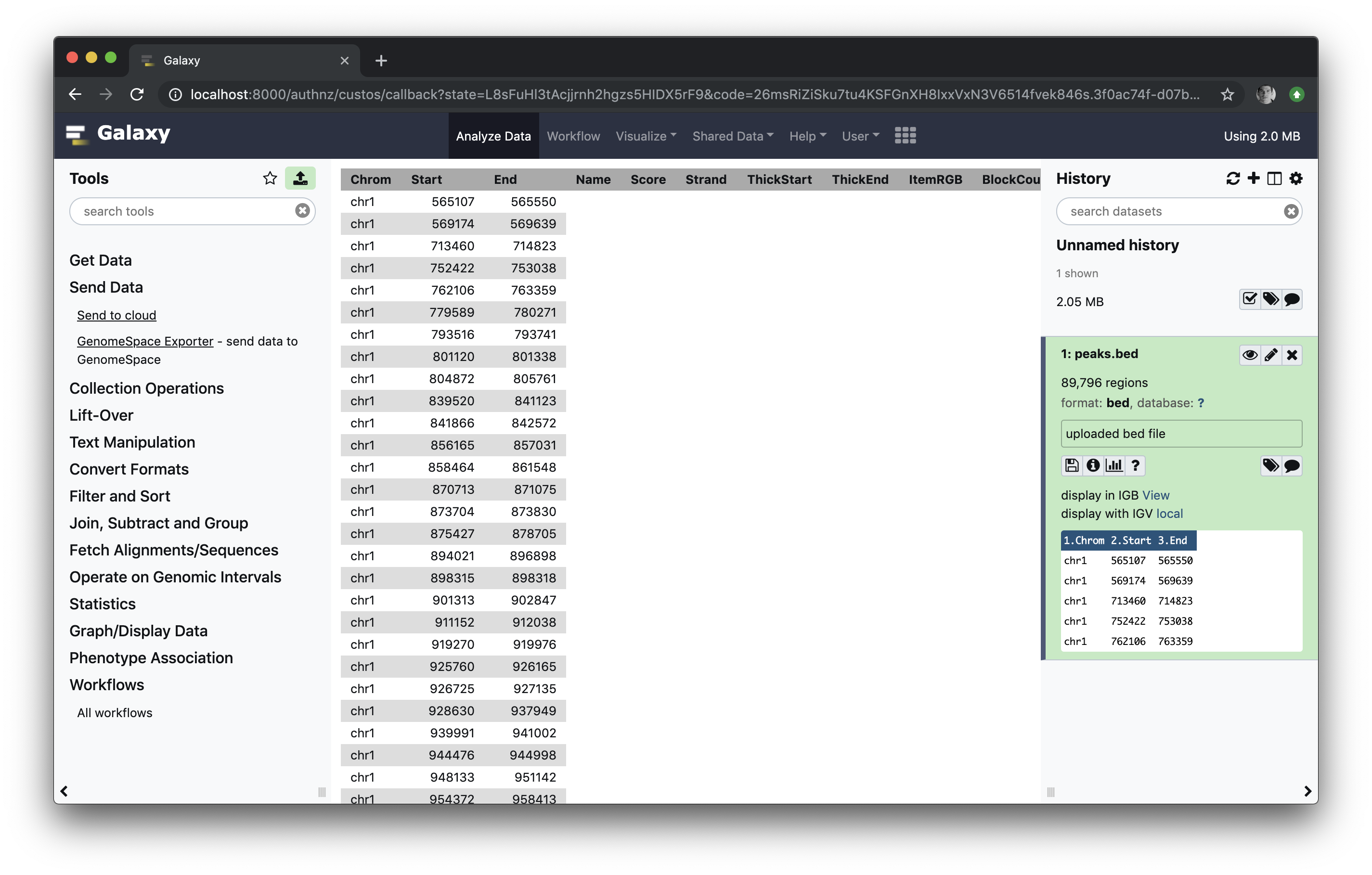 The uploaded dataset is persisted on the given GCS bucket, as shown in the following figure. 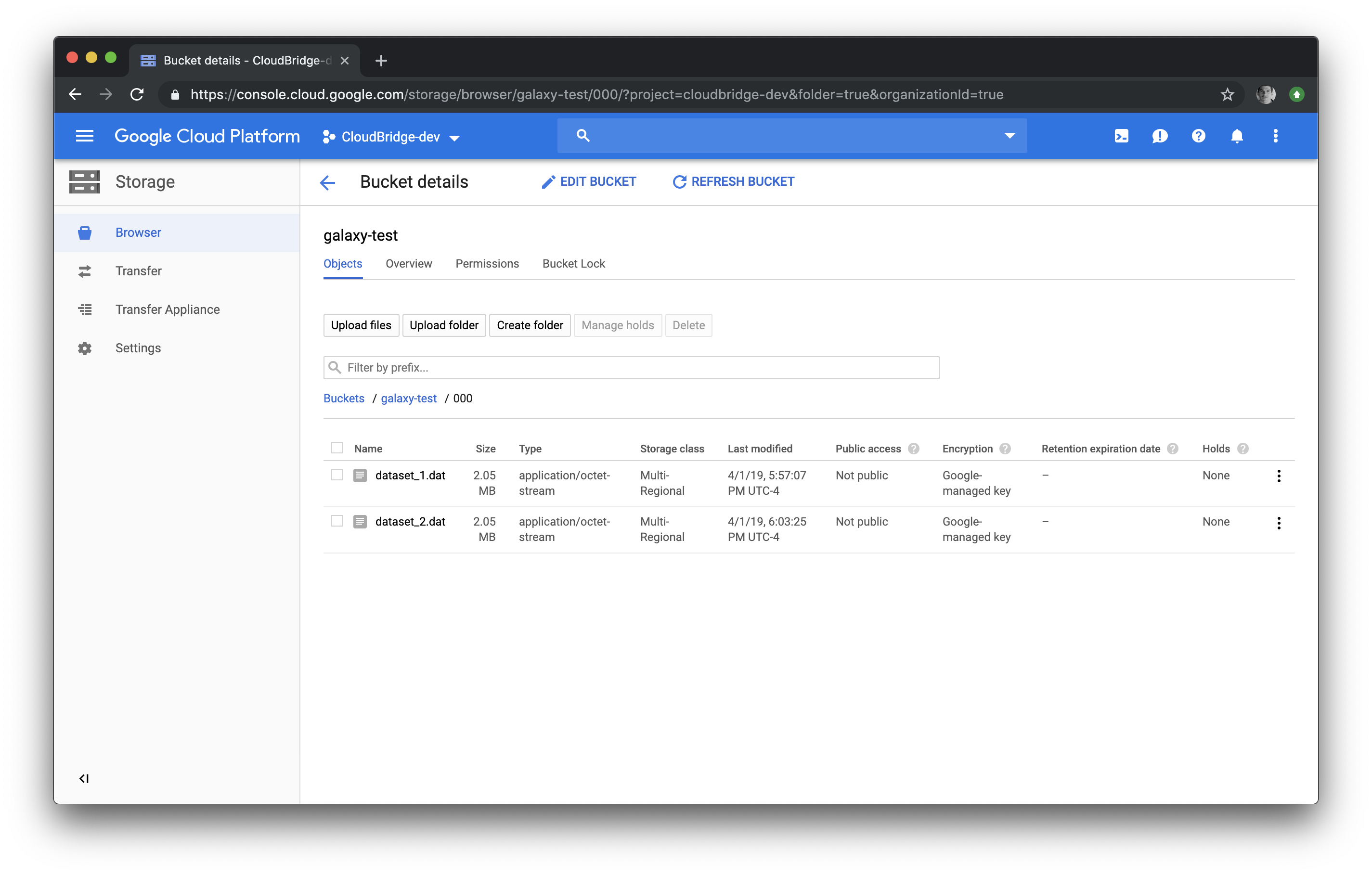 A second feature we would like to describe in this post is the ability to launch transient instances of Galaxy on GCP. In general, cloud instances are particularly useful for workshop training purposes, wanting to avoid a queue on a public server, or testing a new tool. To get started, we use CloudLaunch as a portal for launching servers on cloud providers. Head over to https://launch.usegalaxy.org/ and select CloudMan 2.0 appliance from the list. The CloudMan 2.0 appliance is currently a placeholder for launching the containerized version of Galaxy that was described above. 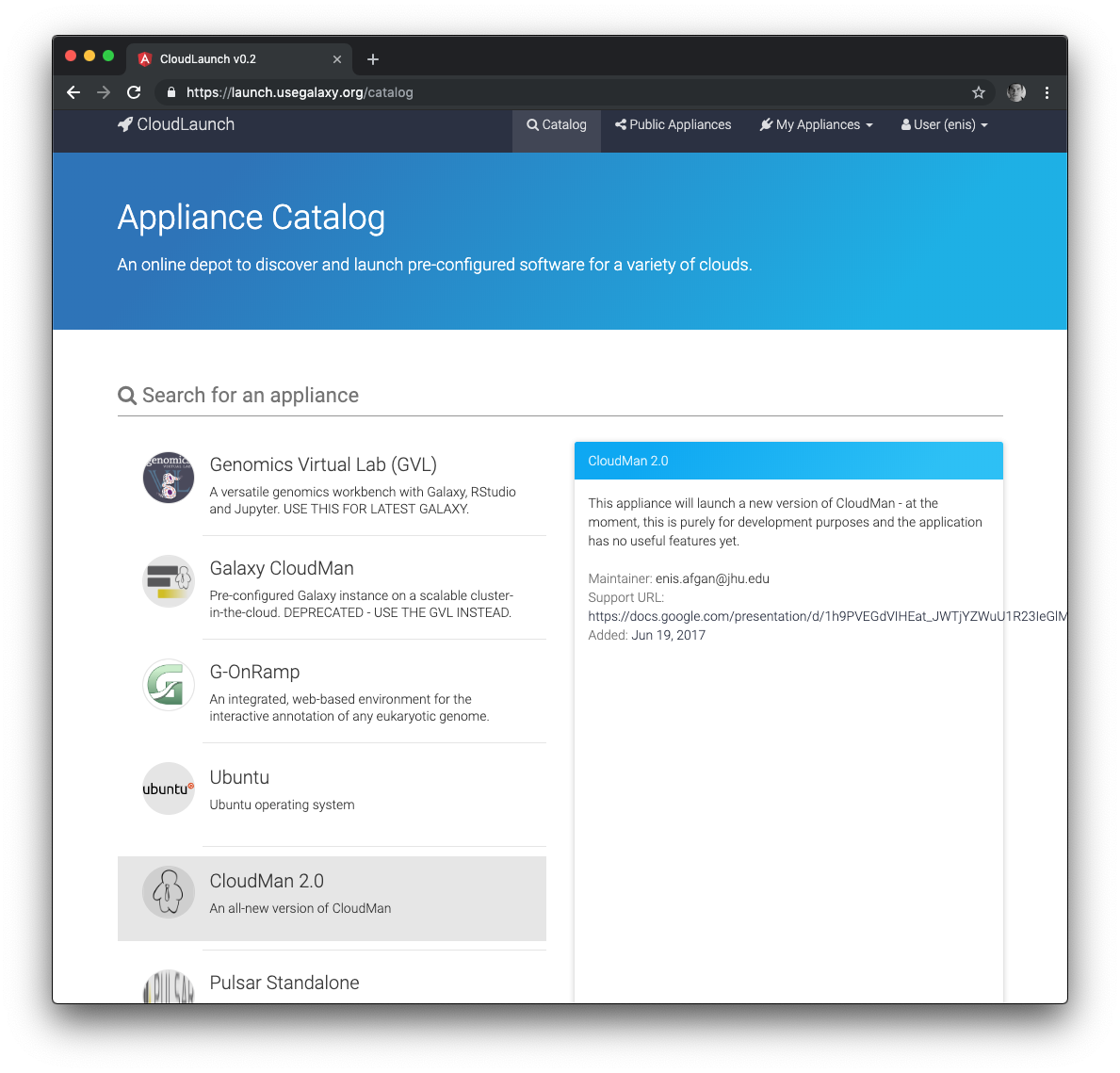 Follow the launch wizard to create your new instance. If you do not already have the required Google cloud credentials, check out the documentation here: https://www.galaxyproject.org/admin/objectstore/gce/#create-a-service-account. 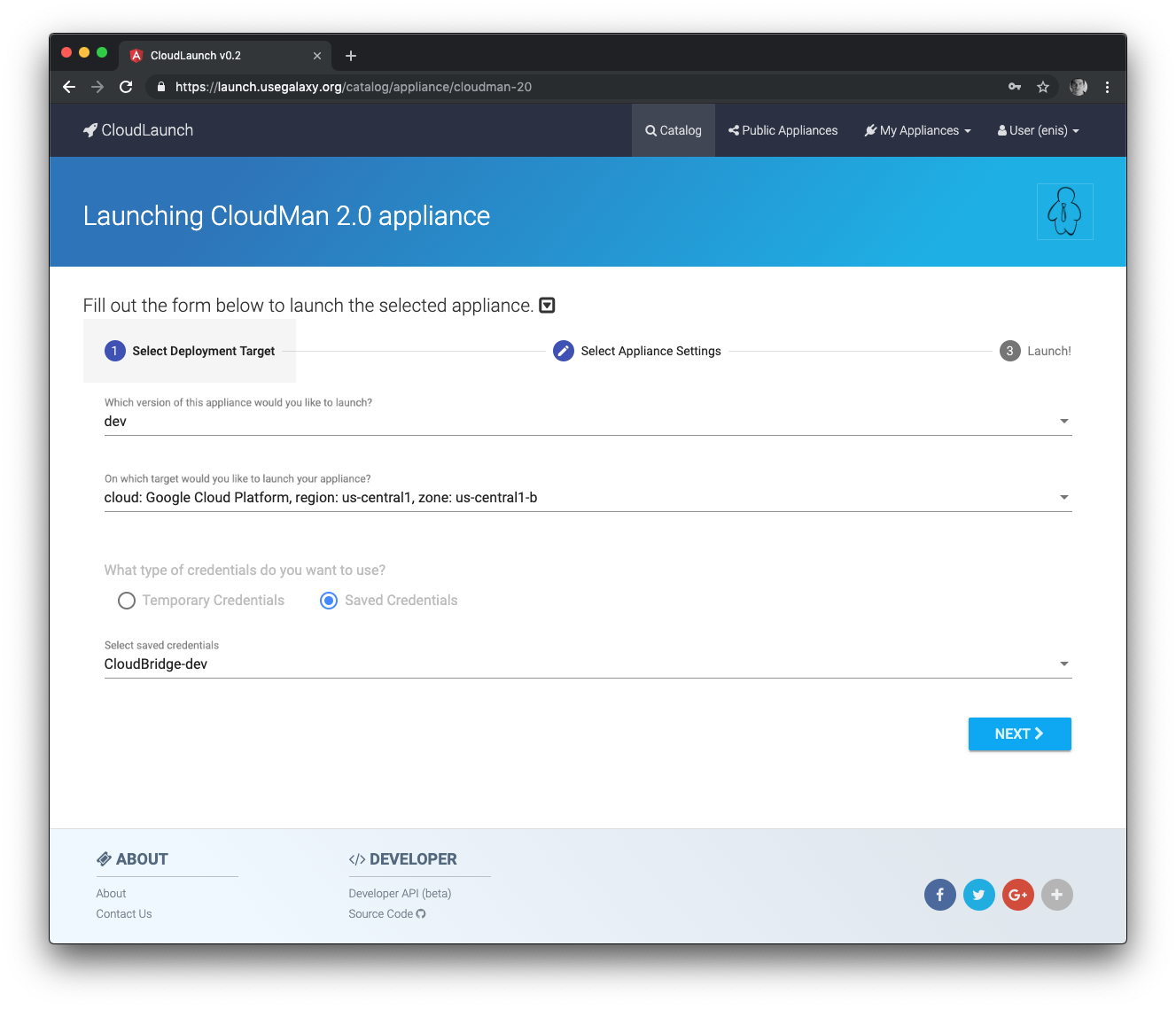 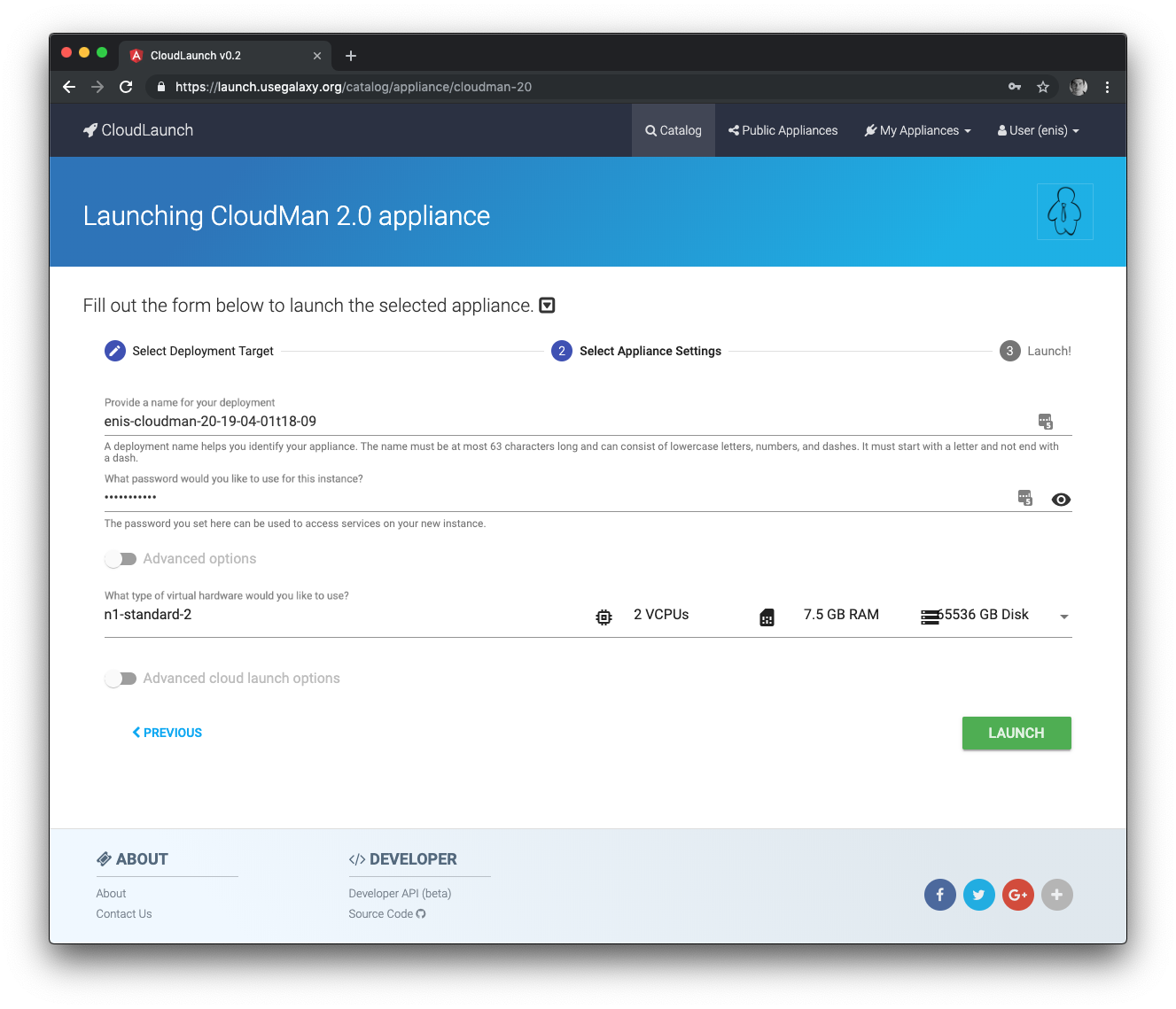 The launch process will take close to 20 minutes (we’re working on it!) and once it completes, you will have access to a personal Galaxy instance. To access it, follow the supplied access link in CloudLaunch. This link will take you to the CloudMan management interface where you’ll need to login using admin as the username and the password you supplied in CloudLaunch. From there, you can observe the status of the machine and, after a few more minutes, access Galaxy to use it for some of the task suggested above. 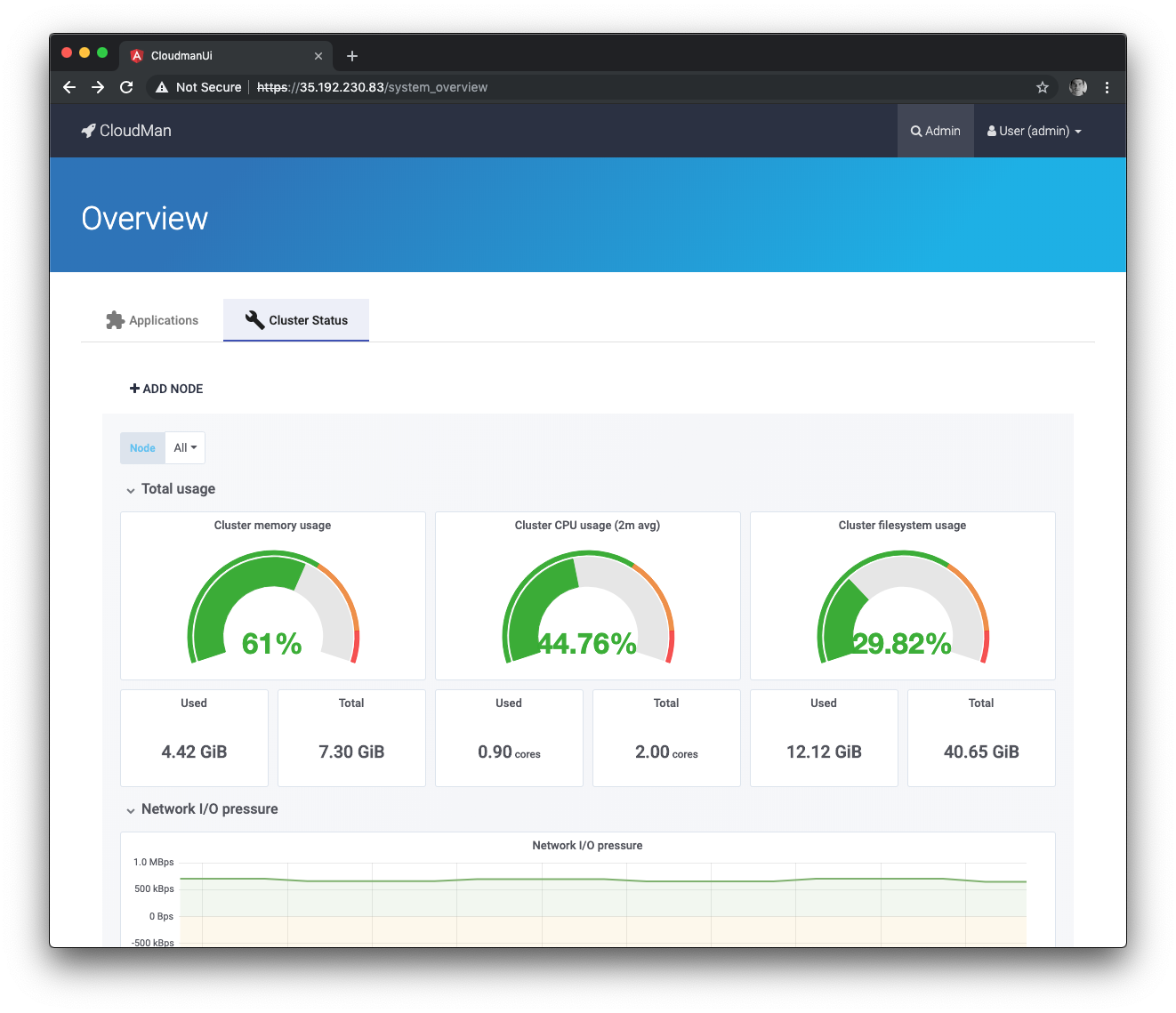 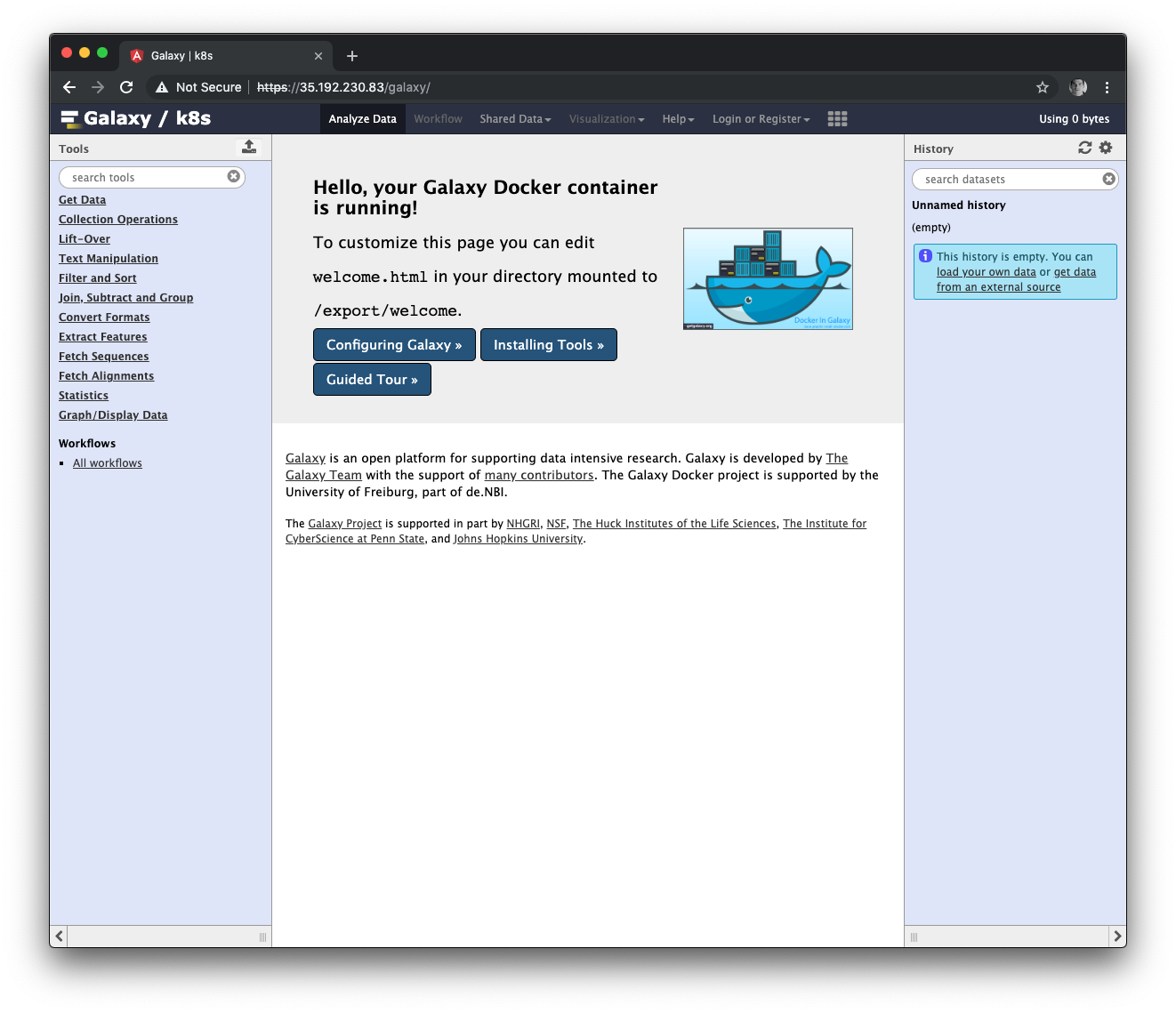 As a preview of the CloudMan 2.0 features, note the ability to visually update Galaxy configurations directly from CloudMan. Making yourself a Galaxy Admin is one idea here that translates to the ability to install additional tools in Galaxy. 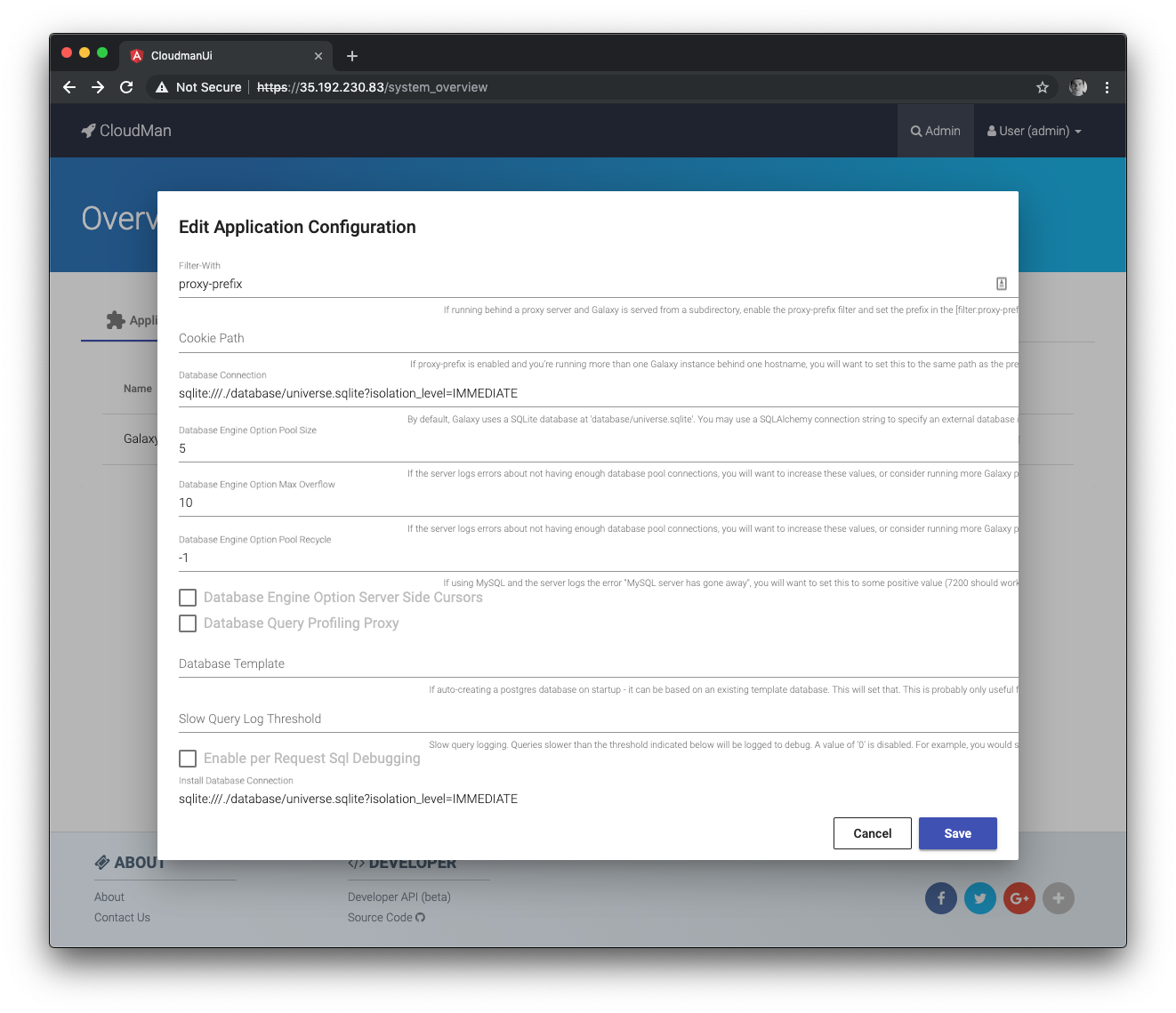 To shut down your instance, head back to CloudLaunch. Under My Appliances page, you can delete your instance. Keep in mind that for the time being, these instances are transient, meaning that once shut down they are permanently deleted. Hence, for the time being, these instances are primarily useful for one-off data analysis needs that give you an option to use GCP (or other supported provider).

Work is continuing apace to realize a fully featured integration of Galaxy with GCP, and other providers. Stay tuned, the Galaxy Community Conference 2019 is just around the corner!