Welcome to the December 2017 Galactic News, a summary of what is going on in the Galaxy community. If you have anything to add to next month's newsletter, then please send it to outreach@galaxyproject.org.

Registration opened in November for the European Galaxy Administrator Workshop.

Although located in Europe, and named to reflect this, the workshop is definitely open to a world-wide audience. The workshop is a result of the collaboration between the ELIXIR Galaxy WG and the Galaxy Project, and so far known, this is the only Galaxy Admin workshop planned for 2018.

Participants are to cover their own travel and accommodation, while the workshop participation is free of charge.

The workshop is already close to full. If you are interested, you are encouraged to apply right now. 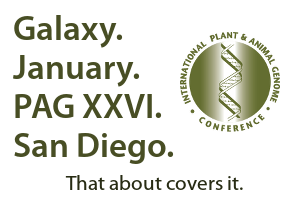 The 26th Plant and Animal Genome Conference will be held January 13-17, in San Diego, California. PAG is the largest ag-genomics meeting in the world and Galaxy will be there to help researchers get the most from their data. There will be a Galaxy Workshop with 4 talks, and a Galaxy Community Update talk during the GMOD session. See the Galaxy @ PAG page for details.

If you are at Cal State San Marcos, or anywhere nearby, there will be an Introduction to Galaxy Workshop in San Marcos, California on Friday January 12. The workshop is free, but space is limited, so you are encouraged to register now.

As a grant funded activity housing is included; however you will need to cover your own travel. If you teach at an HBCU or Minority-serving institution (by Dept. of Education criteria) JAX may be able to provide a modest travel award.

The course is for faculty who primarily teach undergraduate students and will be held at JAX Genomic Medicine in Farmington CT, May 21-25.

The Galactic Blog is a place for longer-form posts that are relevant to Galaxy. (See Galaxy News for shorter-form items.)

The Galactic Blog needs you!

The Galaxy community needs to know what you are doing. If you have done something that others would benefit from knowing then please create a Galactic Blog post describing your experiences.

Blog posts can either be directly created on the Hub, or can be posted on your favorite blogging platform and linked to from the Blog home page. See the CONTRIBUTING page for how.

The Galactic and Stellar publications added in October were:

There are over 90 publicly accessible Galaxy servers and six semi-public Galaxy services. Here's what happened with them in November.

And it's available on the MiModD NacreousMap public Galaxy Server. MiModD is a comprehensive software package for the identification and annotation of mutations in the genomes of model organisms from whole-genome sequencing (WGS) data.

As part of the move to Zotero, we have started tagging papers that use, mention, implement or extend public Galaxy Servers with the server name. Here are the counts for November's papers.

The Galaxy Committers published the 17.09 release of Galaxy at the end of October.

See the 17.09 release announcement for details.

The Galaxy Docker project has seen a matching release, for Galaxy 17.05. Major features include

Command-line utilities to help with managing users, data libraries and tools in a Galaxy instance, using the Galaxy API via the BioBlend library.

CloudBridge aims to provide a simple layer of abstraction over different cloud providers, reducing or eliminating the need to write conditional code for each cloud. It is currently under development and is in an Alpha state.