We reached 5,000 publications in the Galaxy Publication Library last week. The library tracks publications that use, extend, implement or reference Galaxy or a Galaxy server. It includes journal articles, theses, and a couple of odds and ends. This milestone is a good opportunity to look at what the library tells us about where the Galaxy project has been, and maybe where it's going too.

The library was started December 2011, when the first 168 galaxy related publications were added and classified using 8 tags. This included all project publications plus every pub that ad hoc literature searches could find at the time. The library started on CiteULike and stayed there until September 2017, when we moved it to Zotero. The library grew to 4500 papers during that time.

The library uses tags to indicate how the publication relates to Galaxy. See below for an explanation and history of the tags.

Publications and Tags Over Time

Trends in the publication library reflect the trajectory of the Galaxy Project over the last 6 years.

Not all Methods paper say which Galaxy instance(s) they used. But starting in 2013, papers that do mention this are also tagged with UseMain, UsePublic, UseLocal, and/or UseCloud tags (see Tags below for an explanation of all tags). 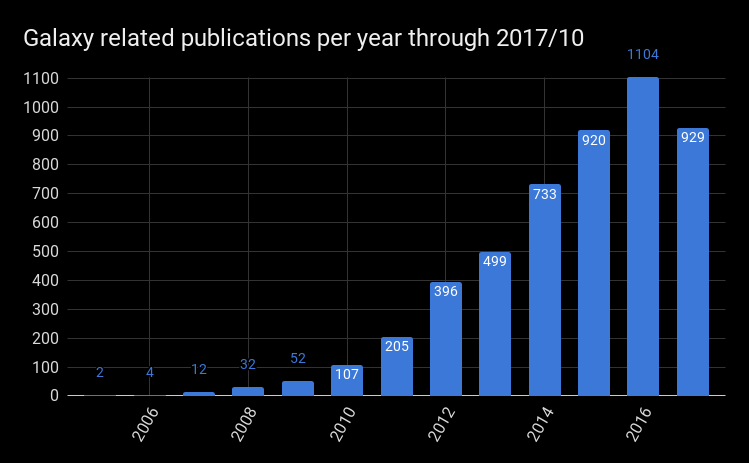 The library can also tell us which journals are most popular. Here's the top 20:

Eight of the top ten journals are open access. If you are curious about the remaining 1,045 journals they can be found here.

Which is an exemplar 5,000th publication: It's a Methods paper, by far the most popular topic tag; a UsePublic paper, an ascendant topic tag; and a >Huttenhower paper, the most frequently referenced public server tag. And it's open access too. See the paper's zotero entry for more.

If current trends continue we'll hit 10,000 publications sometime in 2021. Look for the update.

Thanks for using Galaxy,

We've used Topic Tags since the beginning of the library to track how publications relate to Galaxy. Since the move to Zotero, we've also added Galaxy Featured Tags, Public Server Tags, and Publisher Tags. They are all explained here.

Topic tags indicate how the publication relates to Galaxy. Here's the current set and when each tag was added:

With the move to Zotero we added two new sets of tags. The first set is used to highlight publications that feature Galaxy prominently:

The second set of new tags show which public Galaxy server or service is used or discussed in publications. These are tagged with the server's name, preceded by a ">". For example, the >RepeatExplorer tag lists all papers that use or reference the RepeatExplorer public server.

Zotero is configured to also add any keywords it can detect automatically when the publication is added. These tags are not rationalized in any way, and tend to describe the research topic or domain. Prosapip1 and Genome evolution are examples.

These tags were added over a 6 year period. Are older papers back-tagged when new tags are added? Mostly not, but there are some exceptions:

Therefore, don't look for a lot of +UseMain or +Cloud tagged papers from before 2013.