Welcome to the October 2016 Galactic News, a summary of what is going on in the Galaxy community.

The big news this month is a series of upcoming events:

There are a wealth of events coming up. Here are some highlights, and a report on one from last month too.

We are pleased to announce that early registration and talk and poster abstract submission are now open for GAMe 2017. This meeting will bring together biomedical researchers, bioinformaticians, infrastructure providers, and data producers from across Australia and Asia to share expertise across many levels.

The conference starts 4 February and features two full days of keynotes, accepted and sponsor talks, poster and sponsor sessions, birds­-of-­a­-feather gatherings, a conference dinner and lots of opportunities for networking.

Prior to the conference we are offering a Researcher Training Day on 3 February, aimed at biomedical researchers who need to analyse their biological data. The conference is followed by a four day workshop on Galaxy server administration for those working at that level.

Talk abstracts are due 30 November and early registration ends 31 December. Register now and save up to 43% off regular registration rates. There are also scholarships available for eligible students and postdocs. The scholarship application deadline is 18 November.

We look forward to welcoming you to Melbourne. Remember to pack for our fabulous February weather!

And if you are based in Australia you might also be interested in the newly launched Galaxy Australia Community.

The Galaxy Training Network (GTN) is planning a contribution fest to consolidate our training material and improve the overall training experience in Galaxy on the 6.-7th October 2016!

More information about the project can be found here and a small presentation here. Registration (which is entirely optional - you can just show up) can be done via this GitHub issue. There is also a list of potential issues to work on as well (and more are welcome).

This will be an online contribution fest and the fun to contribute should be priority one! There is enough to work on in all areas, from programming to fix spelling mistakes. So everyone is welcome to improve the Galaxy training material.

Galaxy Admin Training 2016 is a weeklong event offering basic and advanced sessions. It is being held in Salt Lake City, Utah, November 7-11, 2016, the week before Supercomputing 16 (SC16) meets in Salt Lake.

This two day basics session will introduce participants to what you need to know to get a Galaxy server up and running on a standalone server. You'll also learn how to extend your Galaxy with your own tools and tools from the community, and how to define reference data in your server as well.

The three day advanced session will build on topics covered in the basics section. This session both extends those topics, such as tool definition, and adds new ones, such as working with compute clusters and heterogeneous resources. The goal of the advanced workshop is to enable Galaxy administrators to create robust, high-performance Galaxy instances that take full advantage of available tools and compute and storage resources.

Register by October 16 and save up to $230 off late registration rates (and up to $500 if you work in industry). Space is also limited.

We hope to see you in Salt Lake!

The 2016 editions of Swiss-German Galaxy Days will be held 20-21 October in Freiburg (Germany).

Registration is free, but space is limited on both days. We recommend you register soon to secure your spot for one or both days of the SG2016Tour:

The two days will be held in the same location, but will have a different focus. The first day will start with talks, discussions and small demonstrations. This day will be problem / technology centric with small demonstrations and hands-on sessions. Everyone is expected to have their own computer.

The second day is a developers day and we are planning to have 3 to 4 hands-on sessions (1.5h). Every session will start with a 10 minute talk and theoretical introduction, followed by 1h of hacking and 20 minutes discussion and a small break until the next session begins. We have a few proposed and prepared topics but we are flexible so we can discover new areas of the Galaxy.

Galaxy and CloudBridge have joined the Hacktoberfest event this year. If you register with your GitHub account and create 4 or more pull requests during October you will get a free T-shirt and world-wide appreciation! You can browse the entry level issues in the Galaxy code by checking the hacktoberfest label (Galaxy, CloudBridge). CloudBridge already has a new contributor so hurry and hack away!

The Galaxy v16.07 release (see below) included a "Shift of Galaxy tool dependencies to Conda" and that shift is reflected in a whole bunch of activity:

The Galaxy-P Conda Contribution Fest was held online, 27-28 September, with the aim to port as many tool dependencies to Conda packages as possible. Conda packages are the future of Galaxy’s tool dependency management and will yield more robust tools and automatic CI testing of all Galaxy-P tools. More than 20 pull requests were create and merged to BioConda. See the event report for details.

Thanks to everyone who participated!

There are a plentitude of Galaxy related events coming up in the next few months:

The establishment of Galaxy Australia is supported by the EMBL Australia Bioinformatics Resource (EMBL-ABR) in its appointed role of supporting the development of skills and training in the Australian life science research community. At the EMBL-ABR Hub, hosted at the Victorian Life Sciences Computation Initiative (VLSCI), Galaxy is used extensively for teaching and data analysis directly as well as through the Australian-made Genomics Virtual Laboratory. VLSCI’s expert bioinformaticians and professional staff will help promote community activities and training.

Galaxy Australia has a has a Twitter feed (@GalaxyAustralia) for announcements and discussion relevant to the community.

Our first activity is to organise the Galaxy Australasia Meeting 2017 (GAMe 2017), 3-9 February in Melbourne. Registration and abstract submission are open. See the announcement for full details.

117 new publications referencing, using, extending, and implementing Galaxy were added to the Galaxy CiteULike Group in September. The total number of publication is now over 3600.

There are over 80 publicly accessible Galaxy servers and five semi-public Galaxy services. Here's what happened with them in September. 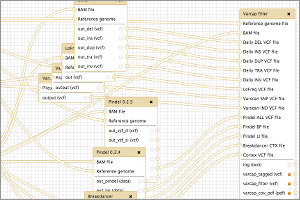 for a description. A tutorial is also available. Users need to create a login to use the server. VarCap Galaxy is supported by Department of Microbiology and Ecosystems Science at the University of Vienna.

Jetstream was officially launched in September and was added to the Semi-Public Galaxy Services list:

THIS CONTENT HAS BEEN MODIFIED SINCE ITS ORIGINAL PUBLICATION

For those looking to perform de novo transcriptome assembly of RNA-seq data, we are pleased to announce that the Trinity assembler is now available in beta on the Galaxy Project's free, public Galaxy server, usegalaxy.org. Due to the high memory requirements of de novo assembly, Trinity runs on the Bridges high memory HPC system at the Pittsburgh Supercomputing Center, via a science gateway grant from XSEDE. Please try the tool out and be sure to report any problems via Galaxy's reporting mechanism.


One new trainng resource was added in September:

The September releases work with recents changes to Galaxy and initial mulled scripts and container resolver.

Planemo is a set of command-line utilities to assist in building tools for the Galaxy project. Planemo saw seven releases in September. The biggest news is that Planemo now uses the brand new Galaxy Tool XML Schema Definition to validate tool definitions. A lot happened with Conda support too.

Pulsar updates were released in August. Pulsar is a Python server application that allows a Galaxy server to run jobs on remote systems (including Windows) without requiring a shared mounted file systems. Unlike traditional Galaxy job runners - input files, scripts, and config files may be transferred to the remote system, the job is executed, and the results are transferred back to the Galaxy server - eliminating the need for a shared file system.

The alpha release of the blend4php package, a PHP wrapper for the Galaxy API was announced in June. It follows the lead of BioBlend which provides a Python package for interacting with Galaxy and CloudMan--hence the use of 'blend' in the name of this package. blend4php currently offers a partial implementation of the Galaxy API and includes support for datasets, data types, folder contents, folders, genomes, group roles, groups, group users, histories, history contents, jobs, libraries, library contents, requests, roles, search, tools, toolshed repositories, users, visualizations and workflows.

An update to Galaxy CloudMan on AWS was released in May. CloudMan offers an easy way to get a personal and completely functional instance of Galaxy in the cloud in just a few minutes, without any manual configuration or imposed quotas. Once running, you have complete control over Galaxy, including the ability to install new tools.

From Ravi Madduri
Globus Genomics RO1 was funded by NHGRI.