Welcome to the August 2012 edition of Galaxy Update, a monthly summary of what is going on in the Galaxy community. Galaxy Updates complement the Galaxy Development News Briefs which accompany new Galaxy releases and focus on Galaxy code updates.

These papers may be of interest to the Galaxy community:

These papers were among 29 papers added to the Galaxy CiteULike group since the last Galaxy Update (for a total of 375 papers in the last ~18 months). The new papers are spread across 6 categories. 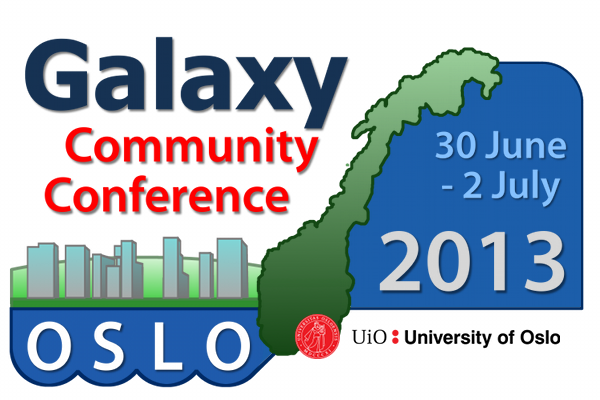 Slides for most talks are already on the wiki, and the rest will trickle in over the next week. Videos of talks and workshops will be posted in about two weeks. Finally, with over 200 registrations, this was for the third year running, the largest Galaxy conference yet.

GCC2013 was also announced at the meeting. It will be held 30 June through 2 July in Oslo, Norway. Watch the GCC2013 page for information as it become available.

There are August application, poster, and paper deadlines for

See the Galaxy Events Google Calendar for details on these and other events.

The 1st Swiss Galaxy Workshop will be held October 3-4 in Bern, and is aimed at Galaxy administrators and users alike. We also welcome participants who are using other workflow management systems, and tool developers who are looking for such systems to offer their tools to a wider audience.

We would like to discuss the status of the Galaxy project, new developments, interface to other systems, extensions and best practice in reproducible research.

The workshop is part of the SyBIT Tech Day series.

Several new repositories were added to the Galaxy Tool Shed in July.

A new Galaxy distribution was released on July 20, 2012. Highlights include: