Welcome to the September 2014 Galaxy Update, a summary of what is going on in the Galaxy community. Galaxy Updates complement the Galaxy Development News Briefs which accompany new Galaxy releases and focus on Galaxy code updates.

Galaxy-UK, a new Galaxy Community was launched in August. The Galaxy-UK Community aims to:

Galaxy-UK is also an information hub for events such as:

The community will also have both online meetings and physical meetings, so keep an eye open for these events.

Don't fret if you want to join a community but you are not in the UK. Galaxy-UK is just one of several Galaxy communities you can join. (And there are rumors of a German language community in the works.)

There are a wealth of Galaxy related events in Europe this fall. Events include a large Galaxy presence at ECCB'14, the Fourth Galaxy User Group Grand Ouest (GUGGO) meeting, the 2014 Swiss-German Galaxy Tour, and several training events in Italy, the United Kingdom, Croatia, Norway, and France.

These events are a great way to meet other Galaxy users and developers and learn and share best practices. If you're in Europe and are interested in learning more about Galaxy and/or the community, then please give these a look.

The Great GigaScience and Galaxy Workshop

The The Great GigaScience and Galaxy (G3) Workshop will be held, Friday 19 September 2014 at The University of Melbourne from 8:45-5pm.

See the event page for registration and contact links, and additional information.

And don't worry, Europe does not have a complete lock on upcoming Galaxy related events. There is also things going on in North America, and a few more in Australia too. See the Galaxy Events Google Calendar for details on other events of interest to the community.

44 papers were added to the Galaxy CiteULike Group in August, including this one:

The new papers were tagged in many different areas:

August was an eventful month for releases. New versions of Galaxy, CloudMan, BioBlend, and blend4j were all released.

• [Security alert](http://tinyurl.com/nhgmbc5) from July 31st, upgrade now
• [Citations](http://wiki.galaxyproject.org/Admin/Tools/ToolConfigSyntax#A.3Ccitations.3E_tag_set): DOIs, `BibTeX`, and much much more
• [Docker](http://wiki.galaxyproject.org/Admin/Tools/Docker): You voted, we've *got it*, with a little help from our friends (you!)
• Significant Workflow, API, Job, Tool Shed, and Dataset management updates
• Fixes, tunings, plus just a drop of → Gossip

This is mostly an incremental bug fix release with the following summary of changes:

CloudMan offers an easy way to get a personal and completely functional instance of Galaxy in the cloud in just a few minutes, without any manual configuration.

BioBlend version 0.5.1 was released on August 19. From the CHANGELOG:

blend4j version 0.1.1 was released on August 27th. Some key features from the CHANGELOG:

We proudly present the first release of the Galaxy IPython project.

Galaxy IPython is a visualization plugin which should enable Galaxy users with coding skills to easily process their data in the most flexible way. With this plugin, it is possible to analyse and post-process data without downloading datasets or entire histories. One of our aims was to make Galaxy more attractive and accessible to bioinformaticians and programmers, and we hope that this project will build some bridges.

Disclaimer: Even though the Ipython notebooks can be stored and reused, this plugin will break the Galaxy philosophy of reproducibility, I feel personally bad about that, but I also think it is a great opportunity to get more bioinformaticians into Galaxy, and to get Galaxy used more often as a teaching resource. By being able to teach not only about workflows but also about data analysis tasks often necessary with Bioinformatics, Galaxy will be significantly more useful in teaching environments.

Keep in mind to write a nice Tool Shed Tool if you catch yourself using IPython in Galaxy to often for the same task. 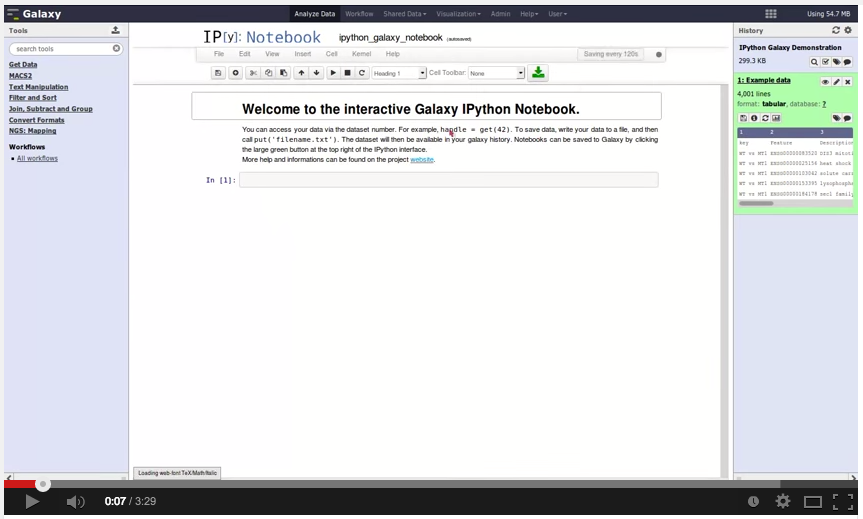 A few features we have up and running:

Please follow the installation instruction on our project page.

The underlying IPython Notebook (+Galaxy sugar) is stored at Github and the Docker Registry.

You can also install a ipynb datatype:

There were no new Log Board or Deployment Catalog entries in August! Eek! Please don't let this happen again!

The Community Log Board and Deployment Catalog Galaxy community hubs were launched last your. If you have a Galaxy deployment, or experience you want to share then please publish them this month.

Here are new contributions for the past two months.