A unique feature of Galaxy is the large number of tools for performing operations on genomic intervals. These tools are based on the bx-python package (https://github.com/bxlab/bx-python). These include ''intersect'', ''subtract'', ''complement'', ''merge'', ''concatenate'', ''cluster'', ''coverage'', ''base coverage'', and ''join''. Some operations are analogous to relational database queries, such as join and coverage. Other operations are analogous to set operations.

Below, each interval operation is described in detail. You can also view screencasts showing an actual "clicking pattern" through the Galaxy interface (note screencast link below each subheading). The examples shown in screencasts use coordinates of coding exons and transposable elements from chromosome 22. This screencast shows how to upload these coordinates.

Intersect allows for the intersection of two queries to be found. The intersect tool can output either the entire set of intervals from the first dataset that overlap the second dataset (e.g. all exons containing repeats), or just the intervals representing the overlap between the two datasets (e.g. all regions that are both exonic and repetitive; see Figure above).

When finding pieces of intervals, or the regions representing the overlap between the two datasets (by setting Return to Overlapping Pieces of Intervals), the output will be the intervals of the first dataset with the non-overlapping subregions removed.

Subtract does the opposite of intersect. It removes the intervals or parts of intervals in the first dataset that are found in the second dataset (Figure above). Like Intersect, Subtract can treat intervals as a whole, removing or keeping entire intervals, or it can break them apart, removing overlapping subregions.

Concatenate and Merge are analogous to addition and union (figure above). They can be used together to combine datasets and merge (or flatten) the intervals.

Concatenate simply combines two interval datasets. The option Both queries are exactly the same filetype indicates that columns in both datasets are the same. If this option is unchecked, then the second dataset is adjusted to match the column assignments of the first. However, since the columns chromosome, start, end, and strand are the only columns used by the operations, all other columns will be replaced in the second dataset with a period(.). Typically this option is left checked, as BED files are the typical interval format used within Galaxy.

The base coverage tool calculates the number of bases covered by all of the intervals in a dataset. It does not count overlapping bases more than once; if there are two intervals referring to the same region, those bases are counted only once.

The resulting dataset will contain intervals representing regions that are NOT transposable elements. Also, a normal complement is done in contrast to a genome-wide complement because when obtaining the simple repeats, chromosome 22 was explicitly specified, and the other chromosomes were explicitly omitted.

Coverage is a combination of intersect and base coverage. Coverage finds the number of bases each interval in the first dataset covers of the second dataset. In addition, it finds the fraction of the interval's total length that covers intervals in the second query. The resulting dataset is all of the intervals from the first input dataset, with two columns added to the end: bases covered and fraction covered. The additional two columns can be manipulated with other tools such as “Filter” under the “Filter, Sort, Join and Compare” section of the toolbox or with “Compute” under the “Edit Queries” section of the toolbox. Below is the example:

If Query1 are genes

and Query2 are repeats:

the Result is the coverage density of repeats in the genes:

For example, the following line of output:

Cluster is one of the most versatile and powerful interval operations (figure above). Cluster finds clusters of intervals, and has a wide range of behavior depending on the options specified. The Maximum distance parameter specifies the maximum distance allowed between regions for those regions to be considered a cluster. Maximum distance can be a positive number, zero, or a negative number:

A cluster will be ignored unless it has at least as many intervals within it as specified by the parameter Minimum intervals per cluster. If this is set to 1 or lower, then all intervals, even single intervals that do not cluster with any surrounding intervals, are included in the output.

Each output option is illustrated here. Notice that in the last two options/examples intervals with invalid chromosome, start, and end are output, rendering those datasets no longer usable without filtering out the invalid intervals. 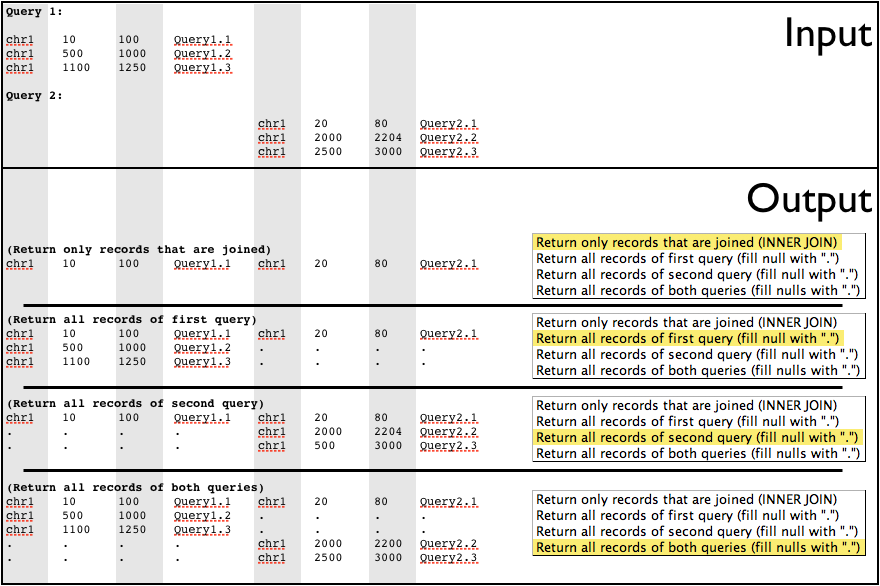