Welcome to the July 2016 Galactic News, a summary of what is going on in the Galaxy community.

And it was again a smashing success! For the 5th year in a row we had over 200 participants signed up for GCC events, including hackathons, training, and the two day meeting. The meeting featured accepted presentations and keynotes, posters, the new Visualization Showcase and Software Demo sessions, lightning talks, and birds-of-a-feather meetups.

GCC2016 was held June 25-29 at Indiana University in Bloomington, Indiana, United States. This was the 7th annual gathering of the Galaxy community.

Slides for accepted and lightning talks are online, as are most posters. Remaining slides and video of training and talks will also be posted online this month.

Thanks to everyone for making GCC2016 a success, and looking forward to seeing you at GCC2017!

The 2017 Galaxy Community Conference (GCC2017) will be held 26-30 June in Montpellier, France. Montpellier is home to three universities, and is the agronomy hotspot in France. The city is home to half a million people is the third largest city of France's Mediterranean coast.

GCC2017 will feature hackathons, two days of training and a two day meeting highlighting the best that data intensive biology has to offer.

All conference events will be at the Le Corum Conference Center, located in central Montpellier, next to the train station, and a 15 minute ride from the Montpellier International Airport. GCC2017 is hosted by the French Institute of Bioinformatics (IFB).

There will be a Swiss-German Galaxy Tour this fall featuring a range of events over 2 days in October. Events will held in Freiburg (Germany).

Registration is free, but space is limited on both days. We recommend you register soon to secure your spot for one or both days of the SG2016Tour: Register Now

The first ever Galaxy Project Admin Training workshop will be held November 7-11 in Salt Lake City Utah. The workshop features a 2 day basics session followed by a 3 day advanced session. There is a separate registration for each session, and participants may sign up for one or both. We are working with the Utah High Performance Computing Center at the University of Utah for cluster access during the advanced session.

The introductory session will be at the Salt Lake City Library, and the advanced session will be on the University of Utah (the "U") campus. Workshop housing is on the U as well.

The curriculum will be published and registration will open later this month. Watch this space. This workshop is the week before Supercomputing'16 meets in Salt Lake.

ELIXIR, the European life-science Infrastructure for Biological Information, aims to orchestrate the collection, quality control, share-ability and archiving of large amounts of biological data produced by life science experiments and the resources to compute with this data.

Galaxy is widely used in the ELIXIR community. The French ELIXIR node (IFB) and the ELIXIR Galaxy Working Group will organize a knowledge exchange workshop in January 2017 (date tbc) in Strasbourg (France). This workshop will be for developers that want to set up a Galaxy instance, wrap tools and use Galaxy for data analysis and visualisation.

The Galaxy Australasia Meeting (GAMe 2017) will be held 3-9 February in Melbourne Australia. The schedule has been set:

Instructors and speakers will include experts from Australia and Asia, as well as members of the Galaxy Team. Training sessions and instructors will be announced shortly. Registration and abstract submission will open in August. Watch this space.

There are a plentitude of Galaxy related events coming up. Here's what's coming up over the next fe months:

One new publicly accessible Galaxy servers was added to the list in June: 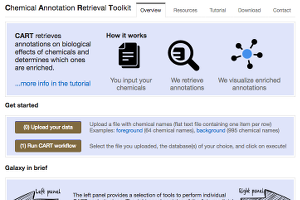 And one new set of Semi-Public Galaxy server was added in June. Semi-public servers aren't fully publicly accessible, but that are accessible to a larger group than just the host institution's members.

We are pleased to announce the alpha release of the blend4php package, a PHP wrapper for the Galaxy API. It follows the lead of BioBlend which provides a Python package for interacting with Galaxy and CloudMan--hence the use of 'blend' in the name of this package. blend4php currently offers a partial implementation of the Galaxy API and includes support for datasets, data types, folder contents, folders, genomes, group roles, groups, group users, histories, history contents, jobs, libraries, library contents, requests, roles, search, tools, toolshed repositories, users, visualizations and workflows.

Planemo is a set of command-line utilities to assist in building tools for the Galaxy project. Planemo 0.27.0 was released in June. Some highlights:

Highlights of June releases include:

The Galaxy Committers team is pleased to announce the April 2016 (v16.04) release of Galaxy.

Please note that Python 2.6 is no longer supported as of this release. See the 16.04 release announcement for details.

Tools may now declare which version of Galaxy they require. Tools requiring 16.04 or newer will have new default behaviors (such as using exit code for error detection) that should simplify tool development. See PR #1688.

Galaxy can now start a Pulsar application embedded within the Galaxy process itself. This allows using Pulsar’s job staging and isolation without requiring a RESTful web service or a message queue. This is enabling usegalaxy.org to run jobs to on the new JetStream cloud. See PR #2057.

And, thanks to Björn Grüning, there is also now a Docker image for Galaxy 16.04 as well.

Did not get there this month. Look for a double edition next month.