Welcome to the January 2017 Galactic News, a summary of what is going on in the Galaxy community.

As always here are a wealth of events coming up. Here are some highlights:

GAMe 2017 will bring together biomedical researchers, bioinformaticians, infrastructure providers, and data producers from across Australia and Asia to share expertise across many levels.

We are pleased to announce that the keynote speakers for GAMe 2017 will be James Taylor and Björn Grüning. These two probably don't need introductions in a Galaxy newsletter, but here are some brief ones anyway:

Dr James Taylor is the Ralph S. O’Connor Associate Professor of Biology and associate professor of computer science at Johns Hopkins University. He is a Galaxy Project PI, and one of the original developers of the Galaxy platform for data analysis. His group works on extending the Galaxy platform, and understanding genomic and epigenomic regulation of gene transcription through integrated analysis of functional genomic data.

Dr Björn Grüning is with the Bioinformatics Group at Albert-Ludwigs-Universität Freiburg, in Freiburg Germany, where he heads the Freiburg Galaxy Project. His publication list includes several papers that feature Galaxy prominently, including the recent “Enhancing pre-defined workflows with ad hoc analytics using Galaxy, Docker and Jupyter” (Grüning, et al, 2016. He is a prominent contributor to, and is a driving force in, the Galaxy community. In the past year alone, he helped organize the Bioconda Contribution Fest, Swiss-German Galaxy Days, the Galaxy Training Materials Contribution Fest, the Galaxy DevOps Workshop, and the Conda Dependencies Codefest, and presented and taught at GCC2016. His research interests include data visualisation, computational chemistry, and drug discovery.

Accepted talks will be presented during the 2-day conference, 4-5 February. Talks are 20 minutes long and the meeting is single track.

On-time oral presentation abstract submission has passed but you can still submit late abstracts. Late abstracts are considered as cancellation happens and if the schedule shifts. Abstracts are limited to 250 words.

Screencasts for the August and December GalaxyAdmins meetups have been published:

We are continuing the transformation from our old MoinMoin based wiki to a GitHub based site refered to as the Community Hub, or just the Hub.

And we need your help to finish the move.

Once the Hub is in better shape it will become the galaxyproject.org site. Until then you can find it at new.galaxyproject.org. Once the move is complete and the old wiki will be shut down and those URLs will redirect to the new site.

We are using GitHub issues and a Gitter channel to coordinate work.

Some highlights from December:

There are over 90 publicly accessible Galaxy servers and six semi-public Galaxy services. Here's what happened with them in December. 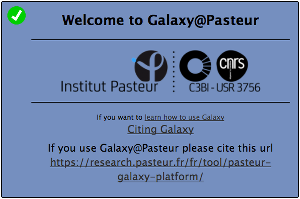 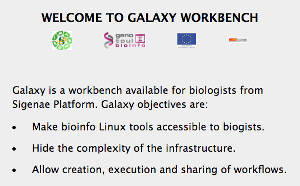 
No new resources were added to community hubs in December.

The Galaxy Committers team is pleased to announce the October 2016 (v16.10) release of Galaxy.

An arbitrary code execution vulnerability in two tools and an XSS vulnerability with the upload tool were identified this release cycle and have been fixed concurrently with the release. In addition, the fixes have been backported to older releases.

For full details on all of the enhancements and fixes in this release, please see the full release notes.

And, thanks to Björn Grüning, there is also now a Docker image for Galaxy 16.10 as well.

A Pulsar update was released in October. Pulsar is a Python server application that allows a Galaxy server to run jobs on remote systems (including Windows) without requiring a shared mounted file systems. Unlike traditional Galaxy job runners - input files, scripts, and config files may be transferred to the remote system, the job is executed, and the results are transferred back to the Galaxy server - eliminating the need for a shared file system.