Welcome to the January 2014 Galaxy Update, a monthly summary of what is going on in the Galaxy community. Galaxy Updates complement the Galaxy Development News Briefs which accompany new Galaxy releases and focus on Galaxy code updates.

December saw the launch of two Galaxy community hubs - one to describe Galaxy deployments, and one to document admin and deployment experiences with Galaxy. Thanks to everyone who has described their experiences in the first month.

The Galaxy Community Log Board is a place to share how you addressed a particular task in your Galaxy deployment. Log entries describe specific solutions to particular tasks, such as the details of what steps were taken to deploy Galaxy on particular platforms, or specific stumbling blocks when configuring Galaxy. Log entries are an easy way to help others (and learn from others) by sharing what you've already done. If you have figured out or documented how to do something, then this is the ideal forum for sharing that information with the community.

The Galaxy Community Log Board describes how things can be done, and it complements the (also recently announced) Galaxy Deployments Catalog, which describes different Galaxy installations. Both the Log Board and the Deployments Catalog came out of discussions at the GCC2013 GalaxyAdmins Birds-of-a-Feather gathering. Thanks to everyone who attended that BoF and to everyone who taken the time to log their experiences so far.

The Galaxy Deployment Catalog is a place to describe individual Galaxy deployments, and to learn how others in the community are implementing Galaxy in production environments.

If you have a Galaxy deployment then please take a few minutes to describe your instance to the community.

While those numbers are just plain cool, the really useful bit is that there are slides, exercises, and videos for over 4/5 of those presentation. If you have a question about Galaxy, chances are someone talked about it in 2013, and that you can find their slides in the Events Archive.

Many, many thanks to everyone who talked about Galaxy last year and for making their material available online.

52 papers were added to the Galaxy CiteULike Group in December. Some papers that may be particularly interesting to the Galaxy community:

This brings the total number of papers to 1330.

GCC2014 will start with a Training Day on June 30. As for GCC2013, the specific topics offered will be determined by you, the Galaxy Community. Topic nomination was open December 2 through December 20. The organizers are now collating the nominations into a single list that the community (yes, that means you) will vote on these topics January 6-17. The final schedule of topics and instructors will be published no later than February 10, when registration opens.

Watch the Galaxy Mailing Lists for announcements and links to the voting form.

The Platinum, Gold and Silver sponsors will have exhibit booths at the event. There are still Silver and Bronze sponsorships still available. Please contact the Organizers if your organization would like to help sponsor this event.

The 2013 Galaxy Day event took place at Institut Curie in Paris, 4 December. Program and slides for all presentations are available online. A meeting summary is also available.

One new server was added to the list of publicly accessible Galaxy servers last month.

The Chromosome-centric Human Proteome Project (C-HPP) aims to map and annotate the entire human proteome by the "chromosome-by-chromosome" strategy. As the C-HPP proceeds, the increasing volume of proteomic data sets presents a challenge for customized and reproducible bioinformatics data analyses for mining biological knowledge. To address this challenge CAPER 2.0 − an interactive, configurable and extensible workflow-based platform is developed for C-HPP data analyses. 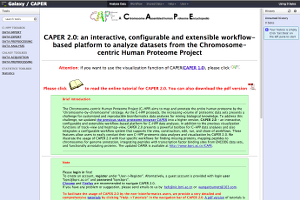 The most recent Galaxy Distribution was November 04, 2013.

The latest version of CloudMan was released in July.