Welcome to the May 2015 Galactic News, a summary of what is going on in the Galaxy community. These newsletters complement the Galaxy Development News Briefs which accompany new Galaxy releases and focus on Galaxy code updates.

66 new papers referencing, using, extending, and implementing Galaxy were added to the Galaxy CiteULike Group in April. Highlights include:

Early registration (save heaps) is now open. Early registration is very affordable and starts at less than £40 per day for students and postdocs. If you work in data-intensive life science research, then it is hard find a meeting more relevant than GCC2015. We look forward to seeing you there.

On-time poster abstract submission closes today. Poster authors will be notified of acceptance status within two weeks. Please consider presenting your work. If you are dealing with big biological data, then this meeting wants to hear about it.

The Galaxy Community Fund Board is pleased to offer registration and lodging scholarships for GCC2015 for students and post-docs who are based in the United States, and who are members of historically underrepresented groups in life science research.

The GCC2015 Scientific Committee is pleased to announce that the GCC2015 Keynote Speaker is Oliver Stegle of the Statistical genomics and systems genetic research group at the European Bioinformatics Institute (EBI). Dr Stegle will speak on his work in Modeling molecular heterogeneity between individuals and single cells.

Dr Stegle is featured in a Young Investigator Profile this month on GenomeWeb (which also happens to be a GCC2015 Sponsor).

Other Events Near GCC2015

Looking to extend your trip? There are also at least 7 other events going on in the British Isles in the week before and week after GCC2015, including events 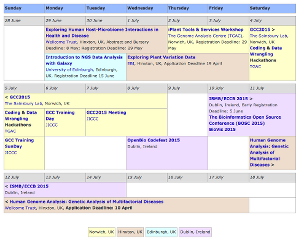 See the Events Aplenty Near GCC2015 news item for dates and deadlines.

We are pleased to announce new GCC2015 Silver Sponsorships from ELIXIR and GigaScience.

[ELIXIR](https://www.elixir-europe.org/) is building a sustainable European infrastructure for biological information, supporting life science research and its translation to medicine, agriculture, bioindustries and society. ELIXIR unites Europe’s leading life science organisations in managing and safeguarding the massive amounts of data being generated every day by publicly funded research. It is a pan-European research infrastructure for biological information. This is the second time ELIXIR has sponsored a GCC. Please welcome them back!

GigaScience journal is co-published as a collaboration between BGI Shenzhen and BioMed Central focused on studies utilizing large-scale datasets and workflows. This is the third GCC that GigaScience has sponsored. Please welcome them back!

And ... Any oral or poster presentation at GCC2015 will also be eligible for consideration for publication in the GigaScience "Galaxy: Data Intensive and Reproducible Research" series (first announced for GCC2013). GigaScience is pleased to offer a 15% discount on article publishing charges for accepted papers from GCC2015.

There are upcoming events in 7 countries on 3 continents. See the Galaxy Events Google Calendar for details on other events of interest to the community.


One new Community Log Board entry was added in April:

And one new Training Resource:

And dozens of smaller bugfixes and documentation updates.

Pulsar is a Python server application that allows a Galaxy server to run jobs on remote systems (including Windows) without requiring a shared mounted file systems. Unlike traditional Galaxy job runners - input files, scripts, and config files may be transferred to the remote system, the job is executed, and the results are transferred back to the Galaxy server - eliminating the need for a shared file system.

Planemo saw two major and several minor releases this past month. The most recent is v0.8.4.

BioBlend V0.5.3 BioBlend v0.3 was also released in March.
BioBlend is a python library for interacting with CloudMan and the Galaxy API. (CloudMan offers an easy way to get a personal and completely functional instance of Galaxy in the cloud in just a few minutes, without any manual configuration.)