Welcome to the April 2015 Galactic News, a summary of what is going on in the Galaxy community. These newsletters complement the Galaxy Development News Briefs which accompany new Galaxy releases and focus on Galaxy code updates.

68 new papers referencing, using, extending, and implementing Galaxy were added to the Galaxy CiteULike Group in March, bring the total to 2200 publications. Some highlights:

The next GalaxyAdmins online meetup will be 16 April. Carrie Ganote from the National Center for Genome Analysis Support (NCGAS) and Pervasive Technology Institute at Indiana University will talk about her Galaxy work with Trinity, IU Galaxy, and the Open Science Grid.

See the meetup page for more. 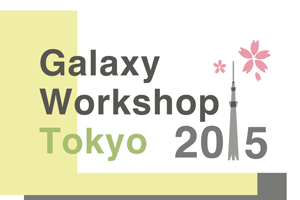 The Galaxy Workshop Tokyo 2015 is a full day of hands-on training, keynotes, lightning talks and discussions all about ways of using Galaxy for high-throughput biology, specially for human genome sequencing. This workshop will consist of two parts: The morning session is a hands-on training to learn how to run Pitagora-Galaxy, our Galaxy preconfigured virtual machine, on your laptop or on AWS cloud. The afternoon session includes keynotes and lightning sessions to explain actual workflows, which you can try immediately on Pitagora-Galaxy.

An intense two-day hands-on collaboration to develop working code that is useful to the Galaxy community. If you know how to code, and want to contribute to one of the most successful open source projects in the life sciences, then please consider attending. See the Code Hackathon home page for more.

An intense two-day hands-on collaboration to develop cutting edge analysis pipelines that are useful to the Galaxy community. If you know data analysis, we would love to have you here to help us beat back those seemingly unsurmountable analysis challenges. See the Data Wrangling Hackathon home page for more.

Something new for GCC2015 is Training SunDay, an additional day of training offered the day before its older sibling Training Day, and featuring a single track with the most in-demand topics. You can attend both Training Days, or just one. Training SunDay features these three topics:

These three topics are also offered on Monday as well. You can register for one or both Training Days.

The schedule for Training Day, Monday, 6 July is available. Training Day featuring five parallel tracks, each with three, two and a half hour workshops. There are topics on using Galaxy, interacting with it programmatically, and deploying, administering, and extending Galaxy. No matter what you do with Galaxy, there are workshops for you.

Early registration (save heaps) will open in April, we promise. Early registration is very affordable and starts at less than £40 per day for students and postdocs. If you work in data-intensive life science research, then it is hard find a meeting more relevant than GCC2015. We look forward to seeing you there.

Abstract submission for Oral and Poster Presentations at the 2015 Galaxy Community Conference (GCC2015) is now open.

We are pleased to announce a joint GCC2015 Platinum Sponsorship from SGI, Intel, and Kelway. Please welcome Intel and Kelway to the community, and welcome SGI back!

There are upcoming events in 8 countries on 4 continents. See the Galaxy Events Google Calendar for details on other events of interest to the community.

One new public Galaxy server was added in March:


One new Community Log Board entry was added in March:

Starting with this distribution, an updated Galaxy release versioning system has been implemented. The versioning scheme is Ubuntu-style.

Galaxy development has moved to Github, but stable/release changes are mirrored to Bitbucket. Deployers can continue to use Bitbucket as they have done in the past. Release branches discussed in the full release notes.

Much of Galaxy’s core tool set has been redesigned. Several contain new functionality. These tools are included in the Tool Shed and many are ready for use on Galaxy Main.

Get the Galaxy Release

Thanks for using Galaxy!
The Galaxy Team

BioBlend v0.5.3 has been released. BioBlend is a python library for interacting with CloudMan and the Galaxy API. (CloudMan offers an easy way to get a personal and completely functional instance of Galaxy in the cloud in just a few minutes, without any manual configuration.)

This is mostly an incremental bug fix release with the following summary of changes:

Enjoy and please let us know what you think,

Planemo 0.6.0 was released in March. The Release Notes:

A best practices for creating Galaxy Tools is now available on this wiki. Thanks to the many contributors who created it.

Note: Starting with the May news, this list will be placed on a separate page and linked to from here. This section is just getting too long (which is the kind of problem we want to have :-).