Welcome to the June 2016 Galactic News, a summary of what is going on in the Galaxy community. 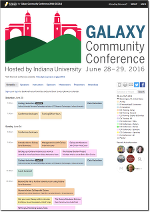 GCC2016 will be held June 25-29 at Indiana University in Bloomington, Indiana, United States. This will be the 7th annual gathering of the Galaxy community, and we are expecting over 200 participants again this year. The 2016 Galaxy Community Conference includes 2 days of hackathons, 2 days of training, and a two day meeting featuring accepted presentations and keynotes, poster sessions, the new Visualization Showcase and Software Demo sessions, lightning talks, birds-of-a-feather meetups, and plenty of networking.

Posters: There is still space!

The deadline for abstract submission has passed. However there are still some poster spaces left and poster abstracts will be considered until we run out of space.

Other types of late abstract submissions can also be submitted and will be considered if and when cancellations happen.

And, please remember that all accepted presentations are eligible for consideration for publication in the journal GigaScience's Galaxy series. Published papers will receive a 15% discount in the article-processing charge if you flag GCC2016 on submission.

Jetstream, IU's newest National Science Foundation-funded project (and in which Galaxy is a partner), and the National Center for Genome Analysis Support at IU are sponsoring an opening reception on Monday evening at the IU Cyberinfrastructure Building. The first ever GCC opening reception will feature local wine/beer, morsels from local eateries, and demonstrations of the 15 million+ pixel IQ-Wall, IU's Data Center, Science on a Sphere, and other IU-centric IT.

Please welcome the Bloomington Life Sciences Partnership (BLSP) as a GCC2016 Sponsor. BLSP is a collaborative effort dedicated to continued life sciences business growth in greater Bloomington, Indiana - a nationally recognized leading metro area in medical devices, contract pharma, biotechnology, basic research and life sciences workforce development. The BLSP continues to carry out its mission of attracting quality jobs to Bloomington and Monroe County. We are fortunate to have a vibrant, diverse and accepting community with a strong academic, advanced manufacturing, life sciences and technology base that add to and support our extraordinary quality of life. With assets like Indiana University and Ivy Tech Community College, we will continue to attract the highly skilled and talented workforce our local employers and community need. The BLSP posts open life sciences jobs, information on local resources and equipment for public use at the university, and posts news and events in the area.

Using Galaxy for Analysis of RNA-Seq and ChIP-Seq Data

The UC Davis Bioinformatics Training Program, a GTN member, will be presenting the workshop Using Galaxy for Analysis of RNA-Seq and ChIP-Seq Data on June 13-17, at UC Davis in Davis, California, United States.

This workshop will include a rich collection of lectures and hands-on sessions, covering both theory and tools. We will explore the basics of high throughput sequencing technologies, focusing on Illumina data for hands-on exercises. Participants will explore software and protocols, create and modify workflows, and diagnose/treat problematic data, utilizing computing power of the Amazon Cloud.

Space is limited and this workshop is already more than 50% full.

There will be two GalaxyAdmins meetups in June:

There are a plentitude of Galaxy related events coming up. Here's what's coming up over the summer:

76 new papers referencing, using, extending, and implementing Galaxy were added to the Galaxy CiteULike Group in May.

Some highlights from May:

The project and the developer community has published a new paper,

that describes recent updates to the Galaxy platform in general and to the project's usegalaxy.org Galaxy server in particular. Check it out.

No new publicly accessible Galaxy servers were added to the list in May. To make up for this sad state of affairs, we created the ...

The Semi-Public Galaxy Servers Directory lists Galaxy servers that aren't fully publicly accessible, but that are accessible to a larger group than just the host institution's members. (Most Galaxy instances are internal to an organization - they can only be accessed by members of the host institution.)

Servers are classified by whom they are accessible to. This can be based on research domain, geography based, or by membership in a multi-organization association that provides Galaxy Servers.

To add your semi-public Galaxy server to this list, please either just add it (hey, it's a wiki), or describe the server here and we'll post it this directory.

Ever wanted commercial support for your Galaxy needs? There is now a Commercial Galaxy Support directory you can consult if you are looking to find service providers and consultants. The initial list includes consultants, server providers, cloud providers, and commercial trainers.

The Galaxy Committers team is pleased to announce the April 2016 (v16.04) release of Galaxy.

Please note that Python 2.6 is no longer supported as of this release. See the 16.04 release announcement for details.

Tools may now declare which version of Galaxy they require. Tools requiring 16.04 or newer will have new default behaviors (such as using exit code for error detection) that should simplify tool development. See PR #1688.

Galaxy can now start a Pulsar application embedded within the Galaxy process itself. This allows using Pulsar’s job staging and isolation without requiring a RESTful web service or a message queue. This is enabling usegalaxy.org to run jobs to on the new JetStream cloud. See PR #2057.

And, thanks to Björn Grüning, there is also now a Docker image for Galaxy 16.04 as well.

Planemo is a set of command-line utilities to assist in building tools for the Galaxy project. There was a lot of activity in the May releases of Planemo. Some highlights:

Highlights of May releases include:

Please welcome Anthony Brétaudeau from BIPAA at INRA to the IUC.

ToolShed contributions for April and May.