Welcome to the February Galaxy Update, a summary of what is going on in the Galaxy community. Galaxy Updates complement the Galaxy Development News Briefs which accompany new Galaxy releases and focus on Galaxy code updates.

55 new papers referencing, using, extending, and implementing Galaxy were added to the Galaxy CiteULike Group in January. Some highlights:

The new papers were related to:

Early registration (save heaps) and abstract submission will open later in February. If you work in data-intensive life science research, then it is hard find a meeting more relevant than GCC2015. We look forward to seeing you there.

Voting on what topics should be offered at the GCC2015 Training Day closes today, 30 January.

Topics for the GCC2015 Training Day are selected by you, the Galaxy Community. There are nominated topics spanning from basic usage to advanced deployment. No matter what you do with Galaxy, there are topics for you to choose from. Your vote will determine the topics that are offered, which topics should be offered more than once, and which ones should not be scheduled at the same time. Your vote matters.

The Training Day schedule, including instructors, will be published before early registration opens in February.

About the GCC2015 Training Day:

The 2015 Galaxy Community Conference (GCC2015) will start on 6 July with a Training Day featuring parallel tracks, each with several multi-hour workshops. There will be at least one complete track about using Galaxy for biological research, and at least one full track on deploying and managing Galaxy instances.

We are delighted to have GenomeWeb as a returning Silver Sponsor for GCC2015.

GenomeWeb is an independent online news organization based in New York. Since 1997, GenomeWeb has served the global community of scientists, technology professionals, and executives who use and develop the latest advanced tools in molecular biology research and molecular diagnostics. Our editorial mission is to cover the scientific and economic ecosystem spurred by the advent of high-throughput genome sequencing. We operate the largest online newsroom focused on advanced molecular research tools in order to provide our readers with exclusive news and in-depth analysis of this rapidly evolving market.

And we are delighted to announce that Globus Genomics is also a returning Silver Sponsor for GCC2015.

The Genome Analysis Centre (TGAC) is a world-class research institute focusing on the development of genomics and computational biology. TGAC is based on the Norwich Research Park and receives strategic funding from the Biotechnology and Biological Science Research Council (BBSRC) as well as from other research funders. TGAC offers a state of the art DNA sequencing facility, unique by its operation of multiple complementary technologies for data generation. The Institute hosts one of the largest computing hardware facilities dedicated to life science research in Europe. It is also actively involved in developing novel platforms to provide access to computational tools and processing capacity for academic and industrial users and promoting applications of computational Bioscience. Additionally, the Institute is a member of the Galaxy Training Network and offers a Training programme through courses and workshops, and has an Education and Public Engagement programme targeting schools, teachers and the general public.

The first GalaxyAdmins meetup of 2015 will happen online on Thursday, 19 February. GalaxyAdmins is a special interest group for Galaxy community members who are responsible for Galaxy installations.

A summary of both the user and admin/developer 2014 Galaxy Community Questionnaires will be presented by Dave Clements, a Galaxy Project Update will be offered by a Galaxy Team member, and Hans-Rudolf Hotz will lead a short discussion on GalaxyAdmins direction.

Thanks to everyone for letting us know what dates and times worked best for you. This time and day of the week worked for a remarkable 91% of respondents.

The first Baltimore Area Galaxy meetup was sold out. It was the right mix of current Galaxy users, people who want to learn how to use Galaxy, and students in Biology/Computer science programs. It was good to see academics unwind with a few beers and talk about their ideas to use Galaxy. The idea behind the meetup was to build a local community of Galaxy users, and to get to know one another personally. This would in turn foster collaborations and also bring forward better feedback to the Galaxy Team as well.

The second meetup is going to be hosted in February, for which we hope to have a slightly more focussed agenda. To talk about one or a few of the topics raised during the course of the month. There is now a Baltimore newsletter if you are interested) which goes out to the members who signed up for the first meetup. We hope to have more people in the coming months, and to grow a stronger Galaxy community in Baltimore.

There are upcoming events in 5 countries on 4 continents. See the Galaxy Events Google Calendar for details on other events of interest to the community.

RiboGalaxy provides on-line tools for the analysis and visualization of ribo-seq data obtained with the ribosome profiling technique. It is a freely available web server for processing and analysing ribosome profiling (ribo-seq) data with the visualization functionality provided by GWIPS-viz. RiboGalaxy provides a compact suite of tools specifically tailored for the alignment and visualization of ribo-seq and corresponding mRNA-seq data. Users can take advantage of the published workflows on RiboGalaxy which reduce the multi-step alignment process to a minimum of inputs.

RiboGalaxy has its own dedicated Help page. Please post any questions you may have on our RiboGalaxy Forum. Anonymous users can use RiboGalaxy. However, the upload and processing of datasets larger than 2GB and the use of advanced features such as published workflows, will require the user to be registered on RiboGalaxy. 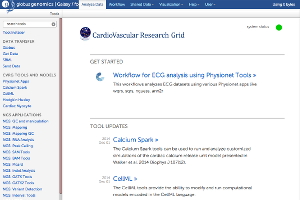 There is CVRG Galaxy Wiki Page for support. To use CVRG Galaxy, an account is required, and anyone can create an account

We are pleased to welcome the Ruđer Bošković Institute in Zagreb, Croatia as the newest member of Galaxy Training Network (GTN). Dobrodošli!

Thanks to the awesome work of community members Björn Grüning and Helena Rasche, Galaxy now features integration with the popular IPython project. The Galaxy-IPython project has been merged into Galaxy core and made into a generic plugin framework of interactive environments based on Docker.

In Galaxy's development branch, the basic tool from has been redesigned and modernized to address certain limitations in Galaxy's responsiveness when working with longer forms containing multiple parameter choices. This new tool form will become the default with the next release - but we are hoping tool author's and power users enable it and provide feedback during this release cycle in order to ensure it is working ideally when it becomes the default.

Version 0.2.0 of Planemo was released in January. Planemo is a set of command-line utilities to assist in building tools for the Galaxy project. Updates included:

BioBlend v0.5.2 was released in October. BioBlend is a python library for interacting with CloudMan and the Galaxy API. In January the BioBlend source was moved to the galaxyproject Github account.

Here are new contributions for the past month.

And a Huge Thank You!

The Galaxy Team would like to thank everyone who took the time to respond to the project's call for support. These will be extremely helpful with our renewal.